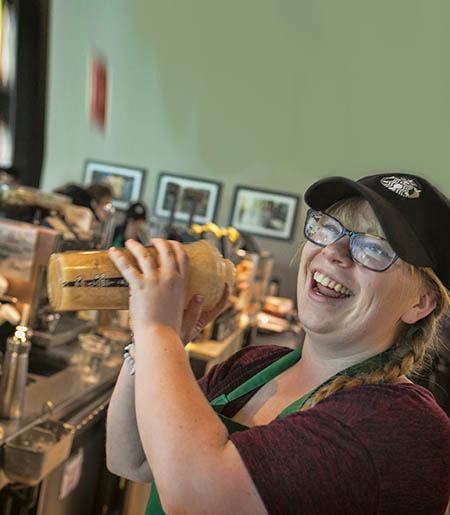 Like many University Scholars, Abigail Cobb ‘18 assumes multiple roles on campus. Her studious side comes out when she is conducting psychology research, and an artistic side appears when she performs as a soloist with Stony Brook’s only all-female a capella troupe, The Pipettes. And there’s another side — the easygoing public persona she flashes as a barista at the East Campus Starbucks.

The challenge of reconciling all these sides may explain why Abigail became a psychology major. She first became interested in the subject when she took an introductory course in her Poughkeepsie, NY, high school and was drawn to a clinical case involving a woman who exhibited multiple personalities.

That interest grew in Nancy Franklin’s cognitive psychology lab, where Abigail’s research focuses on a subset of eyewitness memory that investigates how people remember multiple faces, especially in a criminal situation and whether categorizing faces has an effect on memory.

Abigail explains it this way: “Imagine you were to witness a crime perpetrated by several men who you believed to be part of the same gang and the police asked you later to identify each one of them. Your attention was split between several faces when you viewed them and you already associate them more closely because of their gang affiliation. My research focuses on the types of errors your memory would be likely to make in this situation. It is ongoing but may reveal important information about errors in eyewitness memory.”

She firmly believes that everyone could benefit from taking a few psychology classes. “It is useful in every career to understand how people think, behave and look at the world,” Abigail said. “But psychology is more of a vessel to get me to my goal of becoming a physician’s assistant than a long-term career in itself. And Stony Brook has exceeded my expectations in many ways, preparing me for the rigors of PA school.”

As a psychology major and a biology minor, Abigail is always feverishly using her left brain, so she welcomes rehearsing songs with the Pipettes two or three times a week.

“My experience at Stony Brook would not be the same without them,” she said of her performance mates. She almost let her shyness deter her from auditioning for the Pipettes when she was a freshman. But Abigail is grateful that she overcame her shyness by finding a new outlet for her love of music. She remembered how much she loved to sing, which started when she attended a musical theater camp was she was nine years old and continued in high school when she joined chorus.

The more time Abigail spent with the Pipettes, the more responsibility she took on. She served as the group’s treasurer for three semesters and became president this past semester.

The group’s membership averages from 15 to 20 singers who select their own repertoire and arrange the songs they agree upon performing, often layering their sound with four-to eight-part harmonies.

The Pipettes perform on and off campus, including at community centers and colleges in the region.

“One of the most memorable performances I’ve ever had was in my freshman year. We competed in the International Championship of Collegiate A Cappella, a competition just like the one in the movie Pitch Perfect,” Abigail said.

Music even carries over into Abigail’s barista job at Starbucks. “All of my coworkers know that I sing to myself all of the time to the point where they will ask me if everything is okay if I am not singing,” she said.

Her advice to incoming students is simple.

“One of the most important things I’ve learned in my time at Stony Brook is that college is what you make of it,” she said. “It doesn’t matter what your major or career path is. What really matters are the skills you learn along the way and the relationships you develop. I am so grateful for every experience I have had here because it has transformed me from a painfully shy freshman to a confident young adult who is hopefully ready to take on the world.”