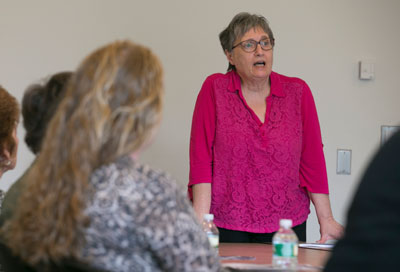 Stony Brook undergraduate Elizabeth Brechter’s 2013 book, An Amazing Journey, is just that — a 56-page story of the author’s battles with various addictive disorders resulting in part from an abusive childhood.

Now 63, Elizabeth was able to find her emotional and mental footing thanks to a strong network of friends and professionals who stood by her when she wandered off the path to recovery and redemption.

In 2008, Elizabeth ’15 applied to and was accepted by Stony Brook University, where she became passionate about history.

“Out of 25,000 who applied to Stony Brook, only 2,700 were selected,” said Elizabeth, who plans to graduate this December. “I felt like a walking miracle.”

“In the not so distant future she will be preparing to wear her cap and gown and walk in graduation and we will all be by her side to cheer her on.”

On May 6, friends, associates and former history professor Wilbur Miller gathered at Roth Café to honor Elizabeth — who will celebrate 30 years of sobriety in July — and get a firsthand account of the story she has shared as an inspiration to others who are suffering from a host of mental disorders.

What makes Elizabeth’s achievements especially remarkable is the fact that her life has been a series of struggles marked by addiction, short-lived jobs, thoughts of suicide, toxic relationships, and a constant need to change her environment when those relationships failed.

Her issues, Elizabeth believes, were fueled by her childhood-rooted anger, low self-esteem and difficulties with social interaction.

As her book recounts, Elizabeth had begun drinking heavily in her teenage years to mask the emotional pain she felt. Eventually, living with an alcoholic father and mentally challenged mother became too difficult to deal with and she left home. Independence, however, presented its own challenges.

After years of turmoil, Elizabeth admitted herself to South Oaks Hospital in Amityville, New York, and wound up in the psychiatric unit on suicide watch. She was diagnosed with clinical depression and was later advised that she suffered from anorexia and bulimia as well.

By the time she entered her fifth decade, Elizabeth had managed to surround herself with a support system and to handle her stress using 12-step program philosophies and other coping devices. After years of losing jobs due to her inability to handle the stress of work environments, she was able to find stable employment as a part-time peer specialist at adult homes.

All this led to her matriculation at Stony Brook, where being a non-traditional student with her personal history presented Elizabeth with a unique set of challenges. The University stepped up to help.

“The Stony Brook campus community has embraced her,” Paterno said. “Disability Support Services, Academic and Transfer Advising, and the History Department all continue to provide support and guidance whenever Elizabeth is in need.”

“Getting my bachelor’s degree at Stony Brook will be the happiest day of my life,” said Elizabeth. She explained that her father had told her she was not “college material” and would always be a failure. He later apologized when she graduated from Suffolk Community College in 1991.

“Faced with problems that would have sunk most of us, Elizabeth never gave up trying to understand herself and get better,” writes Elizabeth’s history professor Nancy Tomes in the foreword of An Amazing Journey.

Elizabeth knows she will never be “symptom-free” but is proud of her voyage. Today, she can serve as a role model for anyone harboring self-doubts.

“I realized that whenever someone has told me I couldn’t do something I made sure I did it. Maybe more people should do this,” she said.