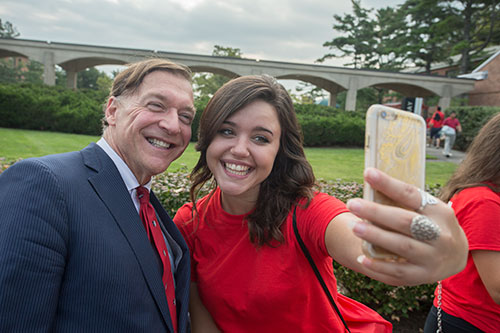 Sharon Benedett ’18 loves to talk, so it’s fitting that the Stony Brook senior is devoted to the field of linguistics.

Sharon’s affinity for language — or at least conversation — was noted as early as primary school. “My report cards always read, ‘Socializes too much in class.’ I was one of those people who really love to hear themselves talk,” she says.

As a native of upstate Webster, New York, Sharon grew up thinking of Stony Brook as a state park in the Finger Lakes region.

But when she began her college search process, she soon learned about another Stony Brook — the University. Her criteria were specific — a major in linguistics, a minor in Japanese, and Teaching English to Speakers of Other Languages (TESOL) program.

“Stony Brook not only had these elements but had them to their fullest degree, and had the benefit of in-state tuition,” Sharon says. “More than that, when I first saw Stony Brook’s website, I had a gut feeling this is where I was meant to continue my education, and not just because we share the same initials.”

Sharon’s love affair with language began as a child when she would smuggle books under her pillow and read well past her bedtime, and continued with her Spanish classes in high school.

“When I was younger, I looked up to a woman at my church who taught English in China and I felt a calling to pursue a similar career,” Sharon says. The more I think about it, the more I realize that Japan is actually the place I am being led to. The culture and art hold a special fascination for me. Big cities are my paradise and Tokyo is the largest metropolitan region in the world. I plan to apply to the Japan Exchange and Teaching Program.”

To reach this goal expeditiously, Sharon enrolled in the five-year combined BA/MA Program with TESOL certification. That means that at the end of this semester she will be finished with her undergraduate classes, and at the end of next year she will have earned bachelor’s and master’s degrees in linguistics, as well as certification to teach English as a second language.

“Stony Brook delivered on its promise of excellence in my chosen field,” says Sharon. “To learn from leaders in the field of linguistics, such as distinguished professor Mark Aronoff, and Japanese scholars, such as the author of Japanese for Dummies Professor Eriko Sato, is truly an honor.”

Sharon is president of the Stony Brook Linguistics Club. One of the club’s annual events is a field trip to the Shinnecock Nation Cultural Center and Museum to learn about the tribe’s efforts to revive its native language, which currently has no fluent speakers.

As an Honors College student, Sharon both values and performs stewardship. During her first few years living in Toscanini College, where Honors College students reside, Sharon initiated projects such as Diversi-tea and Remodel a Bottle. Diversi-tea sought to combat racial stereotypes while sipping tea and eating cookies; Remodel a Bottle was an ecological awareness program where Sharon taught her fellow students how to transform regular plastic containers into works of art. She also originated a Photo Scavenger Hunt that was nominated for a campus award.

More than anything, Sharon says she longs to promote togetherness and collaboration between groups and individuals on campus.

“I want to foster a relationship between the Linguistics Club and like-minded linguistic organizations, such as the National Student Speech Language Hearing Association,” she says. “Then I would concentrate on less similar organizations, such as the Debate Team. Apart from the club, I want to be a common link among people of different ages, races, classes, majors, interests and beliefs. I am happiest when I see the campus come together as one.”