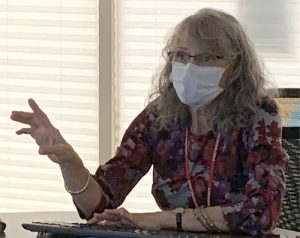 Sylvia K. Wood, DNP, ANP-BC, AOCNP, Clinical Associate Professor in the Department of Doctoral Studies at Stony Brook University School of Nursing (SON), began her educational journey in nursing in 1975. At that time, there was considerable debate as to what was the best educational path and preparation for a career in nursing. Choosing an academic baccalaureate degree program over a diploma hospital-based program was considered against the norm. While Wood’s counterparts had a formidable on-the-job education, possessing spot-on practice savvy, baccalaureate graduates possessed knowledge in theoretical foundations for nursing practice, applied sciences and humanities, laying ground for future scholarship to grow the science of the discipline of nursing. She said this choice in beginning her career was the foundation for her continued professional development.

“I firmly believe that nursing, a human science, is a knowledge-intensive profession requiring multiple ways of knowing,” Wood said. “This debate 40 years ago very much parallels the evolution in graduate nursing education today with the development of two terminal degrees in nursing, PhD and DNP. They are distinctly different doctorates, and both are essential to the advancement of the discipline of nursing. Yet it is the combination of the educational preparation that these degrees offer that I find myself in another new beginning.”

Wood said she is often asked why she’s pursuing a doctorate when she already has a Doctor of Nursing Practice degree. She said it’s her love of research that led her to that path, but she believes these degrees are mutually beneficial.

“Practice scholarship cannot be supported without research scholarship and vice-versa. Nurses need to advance nursing science to develop practice solutions that drive health care policy to meet the complex health care needs in our society,” she said. “Knowledge development in nursing generated by research scholars is essential to advance nursing science but cannot be realized without practice scholars to translate and implement it for clarity about what works or what doesn’t work and generate a new cycle of inquiry.”

Wood explained that her nursing practice has been a life-long endeavor of professional growth to honor her commitment for excellence in the care of her patients, share experience and knowledge with her colleagues, and contribute to the advancement of the discipline of nursing.

“Each time I embark on a new adventure of professional growth, I fall in love with nursing all over again, recognizing the distinctiveness of nursing knowledge that is rich, complex, unique and unlike any other professional discipline,” she said, adding she believes that nursing must include active practice, teaching and research. “Each is critical to inform the other to advance practice and nursing science.”

For these reasons, Wood remains driven in ongoing professional development to enrich her abilities in research, academia and clinical practice. She said her background as a DNP affords a broad view of health systems and policy while having a bedside and practical understanding for where the problems are.

The Evolution of DNP
According to Wood, the DNP degree was a needed response to the growing complexities in health care, and the rapid advancements in science and technology to prepare nurse scholars with a practice doctorate in nursing to be on equal parity with other practice disciplines. Stony Brook’s SON was ahead of the curve in pioneering their DNP program in 2008 among only a few colleges offering the degree in New York State. Wood explained that DNPs are grounded in practice knowledge; their clinical scholarship adds clarity in application of research, reducing the time gap in translating research into practice and contributing to knowledge production through improvement of outcomes. She believes the emergence of the DNP is an opportunity for a needed paradigm shift in nursing, to broaden, deepen and consolidate our science and practice closing the theory-practice gap.

The PhD in Nursing
As stewards of the profession, PhD-prepared nurses are critical in generating new knowledge through original research and educating the next generation of nurse scientists, said Wood. The sustainability of the profession is reliant on nurses, but at this time there are higher enrollments in DNP programs. But Wood said the discipline of nursing and academic education needs more PhD-prepared nurses.  The American Association of Colleges of Nursing recently proposed a bi-directional pathway between PhD and DNP doctoral degrees in nursing, with the potential to achieve this end. This sets the stage for a dual PhD/DNP degree, as well as a new model for PhD and DNP education.

Salient Issues in Doctoral Education
According to Wood, the core of the profession rests on academic nursing education, adding that as guardians for the integrity of the nursing profession, a moral imperative exists urging academic nurse educators to be responsive to society’s need in the professional education of nurses. In March 2021 she attended an online public session for The Committee for the Future of Nursing, which focused on extending the vision for the profession into 2030. The initiative will assist the national effort in reducing health disparities, improve population health and create a culture of health in the 21st century.

“Speaking on behalf of the American Association of Colleges of Nursing, Ann Cary identified that academic nursing must be at the forefront in creating a national culture of health and called for a paradigm shift in how we educate nurses to meet current societal demands,” Wood said. “Here again, the SON is ahead of the curve in developing a PhD program preparing future nurse researchers with vital skills in data science, big data, data management and informatics to address critical population health issues.”

New Beginnings
Wood believes these issues present an opportunity for DNP and PhD nurse educators each with unique skill sets to shape successful futures in preparing the next generation of nurse leaders, scientists, practice scholars, health policymaker and academic educators preserving the discipline within its roots to grow the tree of nursing knowledge. She said the development of a nursing doctorate core with a bi-directional doctoral focus is the future direction of doctoral education.

“An opportunity for new beginnings and growth is before us, to discard old ways of thinking, embrace change to transform our approach to nursing education, practice and research,” Wood said. “Nursing is a relatively young discipline yet nursing science has grown remarkably over the last 50 years from the stewardship of PhD-prepared nurse scientists. The contemporary development of the DNP will accelerate the impact and translation of nursing science into practice. Collaborative efforts of the DNP and PhD and those that choose a dual nursing doctorate can add cohesiveness to the discipline capitalizing on their diverse and complementary aspects of scholarship in moving the profession forward.”