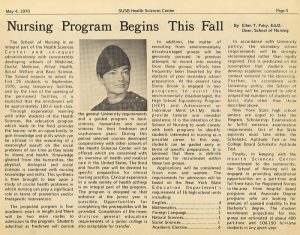 When the School of Nursing opened in 1970, smoking was still permitted in the Health Sciences Center, nurses wore caps, patriarchy in hospital systems was commonplace, and the second wave of feminism was very much in force across the nation, impacting the development of what was soon to be the School of Nursing at Stony Brook University.

Those were just some of the details shared on April 7, 2021, as part of the 50th Anniversary Speaker Series in a session called “Historical Panel: Always a Step Ahead.” It focused on the forces that shaped the development of the SON, as well as its influence on health care delivery both locally and globally. Presenters Arleen Steckel, PhD, RN, PNP-BC, Elayne DeSimone, PhD, NP-C, FAANP, and Patricia Jacobowitz, DNP, NP, RN, and moderator Lenore Lamanna, Ed.D., RN, ANP-BC, created a timeline to highlight how SON has been at the forefront of the nursing profession and has earned its high rankings and reputation as a School of Excellence.

Leading the Field
In a May 4, 1970, newspaper article in the SUSB Health Sciences Center publication, Ellen T. Fahy, EdD, the first Dean of the Stony Brook School of Nursing, announced that beginning that September, a new School of Nursing expected to admit its first 25 students, using temporary facilities. The projection was that by the time permanent facilities were opened, there would be about 100 students in each class. The program established a four-year undergraduate Bachelor of Science degree. It was an integral part of the Health Sciences Center and co-equal administratively with concurrently developing schools of Medicine, Dental Medicine, Allied Health, Social Welfare and Basic Science.

Fahy, who was Dean until 1981, wrote: “Through experiential learning with other students of the Health Sciences, the education program which leads to the field provides the learner with an opportunity to gain knowledge and skills which can be utilized in the mounting of a meaningful assault on the social problems of our time as they relate to illness and health. Knowledge gleaned from the humanities, the physical, biological and social sciences is combined with nursing knowledge and skills. The synthesis is then brought to bear upon a study of crucial health problems in which nursing can play a significant role in terms of prevention and/or therapeutic intervention.”

The article also emphasizes the school’s early actions toward building a diverse student body, highlighting programs that would help alleviate obstacles that might hold a student back from applying to the nursing program.

McClean became interim dean in 1980 and in 1981 became the second Dean and Professor of the School of Nursing; Blair was named Associate Dean.

The 1980s were a politically active time for Stony Brook faculty. In fact, the SON was integral to the development of the NPA of Long Island and Coalition of NPs of New York.

In 1983, the SON started the School of Nursing Honor Society and in 1988 became chartered as the Kappa Gamma chapter of the Sigma Theta Tau International Honor Society of Nursing. Its mission is to support the learning, knowledge and professional development of nurses committed to making a difference in health worldwide. In 2002, the Kappa Gamma Chapter received the Region 14 Computer-Based Professional Education Technology Pinnacle Award for Excellence and has since received several Key Awards.

Developments Continue
SON continued to grow and in the 1990s, introduced new programming. The first Distributed Learning Midwifery Master’s program for nurse midwives and nurses who were interested in becoming a midwife, was launched in 1994 and directed by Judith Treistman, CNM, PhD. The first graduate from the Nurse Midwifery Master’s Completion Program was in 1997.

The 1990s and early 2000s were a period for figuring out technological methods, producing materials and changing up the way the SON did business. The school designed, implemented and evaluated distance programs across all departments, resulting in the launch of 12 distance-learning programs, starting in 1994 through 2018. They were taught on site and online. These included the FNP, Midwifery Masters, Neonatal Nurse Practitioner (NNP) and adult health (AH) in 1997; Psychiatric-Mental Health (PMH) in 1998; Pediatric Nurse Practitioner (PNP) and RN to Bachelor of Science in 1999; Perinatal Women’s Health (P/WH) in 2002; Doctor of Nursing Practice (DNP) in 2008; Nursing Leadership in 2013; Nursing Education in 2014; and a PhD in Nursing in 2018.

From 1995-2001 Dean McClean was appointed Chief Nursing Officer of Stony Brook University Hospital. During this joint appointment, she created many opportunities for the hiring of Nurse Practitioners. Some SON faculty also held joint appointments; currently some faculty still do.

The New Century
One of the many attributes of the SON is that the faculty are distinguished for working as teams and as a result, there have been many projects and accomplishments through the new millennium. These include National Health Service Corps Faculty Mentors

Meanwhile, new degree programs are always being added. Dean McLean initiated the development of the Doctor of Nursing Practice in 2007 and the first class graduated in 2009. That was the same year that she officially retired for the second time. She was followed by Lee Anne Xippolitos, RN, PhD, PMHNP, CNS, NEA-BC who was Dean until 2019. Dean Xippolitos used her expertise as the Chief Nursing Officer (CNO) at Stony Brook Hospital (2002-2013) and as both CNO and Dean (2011-2013) to form strategic clinical partnerships between the School and hospital that led to the School being presented with the “Exemplary Academic-Practice Partnership Award” in 2015 by the American Association of Colleges of Nursing. Among Dr. Xippolitos’s other accomplishments was the start of the Stony Brook Student Nurse Association (SBSNA) chapter of the National Student Nurses’ Association that received a five-year national Stellar Award in 2019, one of only 37 schools to be recognized nationwide with this award. Dr. Xippolitos also received the “2019 Weingarten Leader of Leader Awards” from the National Student Nurses’ Association. She continued to expand the global reach of the School by establishing and hosting Knowledge Exchanges with Cheju Halla University and the Korean Armed Forces Nurses Academy in South Korea. In August 2019, Annette B. Wysocki, PhD, RN, FAAN was appointed Dean and Professor of Stony Brook School of Nursing, becoming only the school’s fifth dean in its 50-year history.

Since that first class of  over 100 who enrolled in 1970, and the first 16 who graduated in 1971, over 13,537 students have graduated from the SON, some who have come back to join the faculty and work in the hospital. And still others can be found in all 50 states and 23 countries across the globe.  As the SON celebrates its 50 years of achievements, the on-going work to achieve clinical excellence and sustain not only today’s students but those of the future are well under way. The School continues to build on the reputation of clinical excellence with expanding research capacity to conduct research to support clinical practice and further innovate to support the education, practice and research missions of the School.