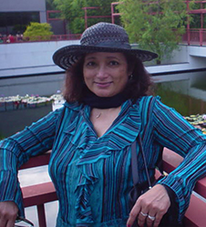 Show up at a Writers Speak Wednesday sponsored by the MFA program in Creative Writing and Literature – either in Southampton or NYC- and you never know what could go down.

When Rita Nezami arrived at a WSW featuring Debra Treisman, an editor from The New Yorker magazine, she left with the heady possibility that her translation of French author Ben Jelloun might be featured in the next TNY, the Holy Grail of writers everywhere.

The Stony Brook University lecturer and author never considered sending her translations to the The New Yorker. Treisman called upon Nezami during the post-reading Q&A, who introduced herself as a translator of French author Ben Jalloun and inquired about the New Yorker’s interest in translated works.

Treisman, a fellow Jelloun translator, encouraged Nezami to send her one of her translations. Par le feu/By Fire, a novella on the life and self-immolation of Mohamed Bouazizi that sparked the Arab Spring, was published in following TNY magazine issue.

Nezami was already a published writer in several U.S. and European journals including The Dirty Goat and Sojourn. However, her experience at WSW should encourage more writers to attend readings, not only to enrich their understanding of a writer’s work and process, but also to practice an important skill every writer who wishes to publish must develop: networking with fellow writers, agents, editors and publishers.

Nezami admits she was at the right place at the right time, but encourages writers to continue to believe, as she does that “good writing will eventually receive recognition.”

The Writers Speak series sponsored by the MFA in Creative Writing and Literature offers free author talks, readings, and engaging interviews with a distinguished guest list of writers, editors and key players in the world of publishing. Offered in Southampton on Wednesdays and Manhattan on Mondays, all Writers Speak events are open to the public as well as students enrolled in the MFA programs in Creative Writing and Literature and in Theatre and Film.

The final Writer’s Speak Wednesday at Southampton is May 7 when 12 MFA students will be reading from their work in progress.