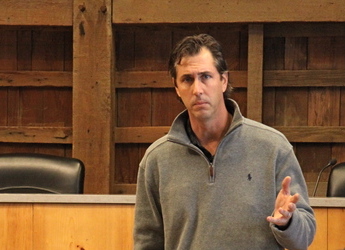 Screenwriter Bill Collage will be the next guest in the spring Writers Speak Wednesdays series of free author talks and readings open to the public at Stony Brook Southampton. Collage will be interviewed by screenwriter, producer, professor and Southampton Arts Screenwriting Conference Director Annette Handley Chandler on Wednesday, February 27, at 7 pm in the Radio Lounge on the second floor of Chancellors Hall.

Working with his writing partner Adam Cooper, Collage has co-written more than 30 feature films and created four shows for network and cable television channels. The two writers’ upcoming projects include Moses, directed by Sir Ridley Scott; The General, a biography of George Washington directed by Darren Aronofsky; and Holliday, an HBO seris about Doc Holliday and Wyatt Earp directed by Ron Howard.

Collage and Cooper are currently writing a 38-episode hour-long series, Cleopatra, for BBCAmerica, as well as a feature film adaptation of best-selling novel The Submission by Amy Waldman for director Noam Murrow.

Produced projects Collage has been a part of include Tower Heist, Get Smart, Fun with Dick & Jane, Accepted, New York Minute, Wrong Turn, I’ll Be Home For Christmas and Ransom. After early success in comedies, he and Cooper changed gears in 2008, completing dramatic projects such as Moby Dick, Marco Polo, Incarceron and Blood Feud.

On May 1, the evening will be devoted to readings by “the stars of tomorrow,” students enrolled in the MFA in Creative Writing and Literature program.