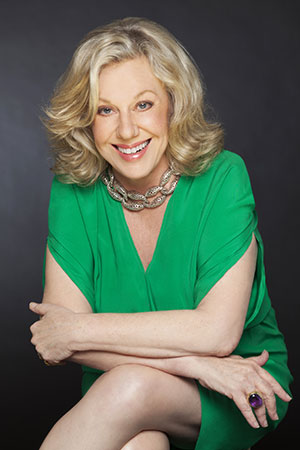 Novelist, poet, essayist, and philosopher Erica Jong will be the featured guest in the next Writers Speak Wednesdays event, a free author talk and reading open to the public at Stony Brook Southampton. Jong will speak on Wednesday, April 27, at 7 p.m. in the Radio Lounge on the second floor of Chancellors Hall.

Erica Jong — perhaps best known for her debut novel, Fear of Flying, which sold 27 million copies — writes a feminist consciousness into her literature. Well-known for her role in furthering second-wave feminism through the publication of 23 books, including novels, poetry, and nonfiction, her work disrupts conventional thinking regarding women, marriage, and sexuality. As such, it has helped define the cultural landscape and illuminated many of the issues of gender politics.

The author started out as a poet, publishing two volumes of verse before selling Fear of Flying to the editor Aaron Asher, who told her to expect sales of 3,000 copies. Instead, as Alexandra Alter wrote in The New York Times (September 7, 2015), the novel “became a blockbuster and cultural touchstone. John Updike compared it to The Catcher in the Rye, and Henry Miller praised it as a groundbreaking literary achievement. The book was translated into 40 languages and was credited by second-wave feminists with paving the way for women’s self-expression.”

In the same article, Alter quoted Stanford University professor Shelley Fisher Fishkin, who said of the novel: “What was really distinctive about it at the time was the notion that a woman could break out of the conventions of how a woman writer should write, and write with candor and humor about topics that were taboo for women.”

Ms. Jong has since published three memoirs, five more volumes of poetry and eight other novels, including historical fiction and a work about Sappho.

In a review in The Guardian of her ninth novel, Fear of Dying, Elaine Showalter wrote that “Jong has turned the page, and as a writer she still has a lot to say.”

Fear of Dying sees Jong exploring a new topic, sex between older adults. Her narrator is a new character, a lusty grandmother in her 60s who is searching for carnal satisfaction at a casual-sex site called zipless.com.

On May 4, the evening will be devoted to readings by “the stars of tomorrow”: students currently enrolled in the MFA in Creative Writing and Literature program.

Writers Speak Wednesdays programs are free and open to the public. The evenings begin with a brief reception at 6:30 p.m.; readings begin at 7 p.m., followed by a Q&A and book signing. All programs are held in the Radio Lounge on the second floor of Chancellors Hall at Stony Brook Southampton, 239 Montauk Highway, Southampton, NY 11968.