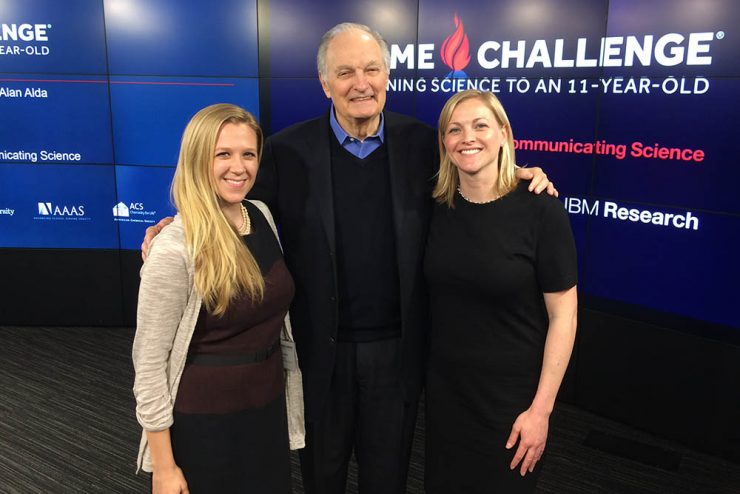 Helping to clear our shores of unsightly and dangerous plastics is both a mission and a great job for Rachael Coccia ’17, who earned a master’s degree in the Marine Conservation and Policy (MCP) program at the School of Marine and Atmospheric Sciences (SoMAS).

“I was looking for a unique program that would allow me to specialize in communicating about marine conservation topics to bridge the gap among scientists, policymakers and the public,” Coccia said. “The one-year program offered that flexibility.”

Coccia, a resident of San Diego, California, described her time at Stony Brook as “pivotal,” helping her get to where she is today: plastic pollution manager at the Surfrider Foundation, a nonprofit environmental organization that works to protect the world’s oceans and beaches.

In her position, Coccia directs the nationwide Ocean Friendly Restaurants and Beach Cleanup programs from the foundation’s headquarters in San Clemente, California.

Coccia credits her time working as a graduate assistant at the University’s Alan Alda Center for Communicating Science for the development of important skills that she would use in her career.

While there she managed The Flame Challenge, an international competition that challenges scientists to explain complex science concepts in ways that are understandable to an 11-year-old. In that role, she reviewed hundreds of entries from scientists explaining energy to kids.

“Having the chance to work alongside Alan Alda was incredible,” said Coccia. “He’s very involved with the Center and in particular, The Flame Challenge.”

She also enjoyed several courses offered at the Alda Center, including Improv for Scientists.

“This class was very eye-opening as I watched scientists from many different disciplines come together to explore their science and learn techniques to better communicate about what they do,” she said.

Another highlight: taking a video production class at the Alda Center in which she documented a trawl survey and developed a video featuring the work of the Shinnecock Bay Restoration Program.

“We pulled up some incredible specimens, including some adorable puffer fish,” she said.

Coccia’s knowledge of things pelagic came easily to her, even though she grew up in landlocked Rochester, New York. That’s because she was always enamored of the outdoors, spending hours running through the woods and playing in a creek. Later on, she became a lifeguard and competed on her high school’s swim team, earning her the nickname “Fish.”

Her most cherished outings, however, were to the beaches of the East Coast. “I would play in the water for hours on end, search for critters under the rocks and dive down to the ocean floor to enjoy the relative peace beneath the waves,” she recalled.

It was through the MCP program that Coccia connected with the Eastern Long Island chapter of Surfrider.

“That introduced me to the Ocean Friendly Restaurants program,” she said. “I was able to visit restaurants to discuss the program with them, learn of the obstacles they would face and come up with solutions.”

That experience proved vital to her current role as the program’s national director.

The path to Surfrider was a circuitous one, but a bit of luck mixed with persistence landed her a dream job.

Coccia first applied for the position of plastic pollution manager soon after graduating from Stony Brook. She made it to the final round in the interview process but ultimately did not get the job because there were more qualified applicants, she was told.

“It’s a very competitive field to find jobs in because these are the jobs that will ultimately save our planet,” Coccia explained.

So she interviewed for a number of related positions online before changing her approach and getting the experience she needed.

Her new strategy was to set up face-to-face chats with local organizations, which led to her taking a part-time position with The Ocean Project, the global coordinator for World Oceans Day. A full-time position became available in 2018.

As the director of youth initiatives overseeing the World Oceans Day Youth Advisory Council, Coccia was able to work remotely before moving across the country to San Diego. Nearly a year after she moved, she saw another posting for the plastic pollution manager position at Surfrider. She interviewed for it this time in person — and landed the job.

Before she enrolled at Stony Brook, Coccia earned a bachelor’s degree in public relations at Fredonia State University, and hosted and associate-produced 40 episodes of the Aqua Kids TV Series, an Emmy award-winning K–12 program that educates young people about ecology, wildlife, science and how it relates to them.

That experience reinforced her commitment to communicating about the crisis caused by plastic pollution — and the outrage she felt learning about the mistreatment of the ocean. The images of marine life tangled in plastic seared into her brain during an undergraduate environmental science class.

Today, she consults with the inaugural Surfrider Club Leadership Council to encourage more involvement and integration with its 100-plus student clubs across the nation.

“The solutions already exist — it’s just a matter of scaling them up and implementing them on a larger scale,” Coccia said.

She said there are approximately 630 Ocean Friendly Restaurants across the country that have committed to using reusables only for on-site dining, avoiding plastic bags and straws, and instituting other plastic-free policies.

Coccia said some people avoid single-use plastics by arming themselves with reusable alternatives, from cups and bags to straws and containers. For those looking to remove all single-use plastics from their lives, there are DIY hackathons that offer instruction on how to make soap, toothpaste, cleaners and more in reusable containers.

“The problem is that it shouldn’t be up to individuals. The plastics industry and larger corporations that profit from plastic put us in this mess, and they should be held responsible to help us out,” Coccia said. “When we can hold them accountable through policies like extended producer responsibility, that’s when we’ll truly be able to leave our toxic addiction to plastic in the past.”

2020 Earthstock Festival: A Virtual Celebration of the Earth

Stony Brook University’s Earthstock celebration, a much anticipated campus tradition since 2002, is taking place in a much different format this year. Due to the coronavirus pandemic, it is entirely virtual. Stony...

Find out what clinical and observational trials doctors and researchers are working on at Stony Brook Medicine.