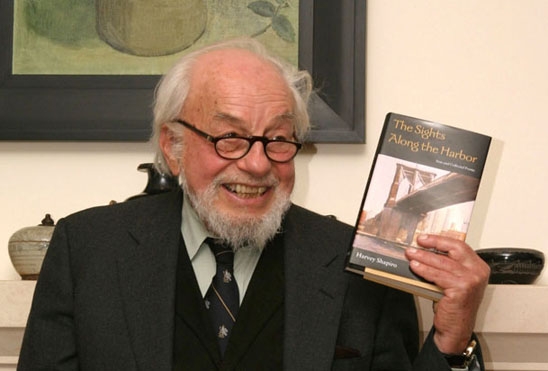 A memorial reading to honor the acclaimed poet and editor Harvey Shapiro will be held on Saturday, June 22, at 6 pm in Duke Lecture Hall at Stony Brook Southampton. The evening will include Shapiro’s friends, former students and family reading his poetry and reminiscing about his life. Shapiro died in January, just a few days shy of his 89th birthday.

Among the many poets participating will be Grace Schulman, former poetry editor of The Nation; Geoffrey O’Brien, editor-in-chief of the Library of America; Robert Hershon, co-editor of Hanging Loose Press; and Julie Sheehan, director of the MFA Program in Creative Writing and Literature at Stony Brook Southampton. The reading will also include the poets Star Black, Donna Brook, Fran Castan, Kimko Hahn, Kathryn Levy, Simon Perchik, Hugh Seidman, and Bill Zavatsky, as well as Bill Henderson, publisher of the Pushcart Press.

Harvey Shapiro (January 27, 1924-January 7, 2013) was the author of 13 books of poetry, including The Sights Along the Harbor: New and Collected Poems. He wrote poetry while working for decades at The New York Times, for nine years as editor of the Book Review and for many years as a senior editor at the Times Magazine. Although he was based in Brooklyn, Shapiro also spent time in East Hampton, where for the last 15 years of his life he lived part-time with his companion Galen Williams. On June 22 he will be celebrated by friends from both New York City and the East End.

The memorial will be held in Chancellors Hall. A short video and reception will follow the reading, and the public is invited to attend.