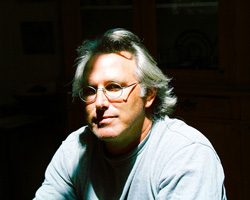 Artist turned author Eric Fischl will be the next guest in the fall Writers Speak Wednesdays series of free author talks and readings open to the public at Stony Brook Southampton. Fischl will speak on Wednesday, October 23, at 7 pm in the Radio Lounge on the second floor of Chancellors Hall.

Fischl’s memoir Bad Boy: My Life On and Off the Canvas was published in the spring of 2013, sharing its title with one of the artist’s earliest controversial and notorious narrative paintings. During the Southampton Writers Conference in 2012, Parrish Art Museum Director Terrie Sultan interviewed Fischl on the stage of the Avram Theater about his narrative approach to painting. The interview was transcribed and was published in the most recent edition of TSR: The Southampton Review, which came out in Summer 2013.

In one of the many positive reviews of the book, a critic for The New York Times Book Review wrote: “Fischl is entertaining company. The same observational frankness that imbues his paintings makes this a brave and candid book. It’s also, in many ways, a painful book: he’s such a deft portraitist that he captures himself at his most unknowing, wounded, prideful and self-contradictory…Occasionally vain, occasionally score-settling, it’s as unsparing as the aging Rembrandt’s blunt self-portraits.”

Fischl’s figurative paintings, sculptures, drawings and prints are in major collections worldwide, including at the Metropolitan Museum of Art, the Whitney Museum of American Art, and the Museum of Modern Art in New York City and at the Beaubourg Museum in Paris. He is a Fellow at the American Academy of Arts and Letters.

Other writers scheduled for the series include Dwight Garner interviewed by former New Yorker fiction editor Dan Menaker on October 30 and Richard Howard on November 13.