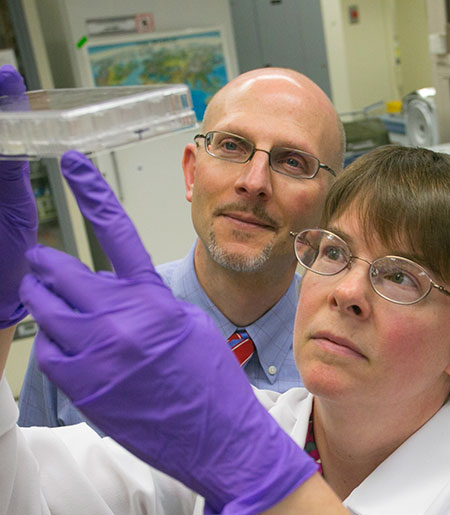 What happens when you put together a nurse, an engineer and a microbiologist? At Stony Brook University, it leads to innovative development of a catheter with LED lights that can destroy infection-causing bacteria while inside the body. Various spectrums of light have long been known to kill bacteria.

But it took a nurse, an engineer and a microbiologist at Stony Brook to apply that particular bit of science to a new device that could save lives and prevent healthcare complications.

A multidisciplinary team led by Annie Rohan, PhD, of the Stony Brook University School of Nursing, is developing a catheter with LED lights that can destroy infection-causing bacteria while inside the body.

According to the Centers for Disease Control, patients in U.S. healthcare facilities suffer over 1.5 million healthcare associated infections annually. Many of these infections are related to the use of bladder and other indwelling catheters, and can lead to sickness and even death.

“The idea behind this project is innovative – and so is the process bringing it to life,” said Kenneth Kaushansky, MD, Senior Vice President for the Health Sciences and Dean of the Stony Brook University School of Medicine.

“The team is solving an important clinical problem by tapping into expertise across the Stony Brook enterprise, from laboratory research to prototype development, with the end user – nursing – shepherding the process to ensure its clinical acceptability.”

The project took off when Lee Xippolitos, PhD, RN, Dean of Stony Brook University School of Nursing, learned that a student in the accelerated Registered Nurse Baccalaureate Program had identified a clinical problem – catheter-related infections – and had an idea to solve it: a catheter with bactericidal LED lights.

Dr. Xippolitos introduced the student, Charles Davis, who had received a doctorate in materials engineering 20 years earlier, to Rohan, a dual-certified nurse practitioner with over 25 years of hospital and critical care experience. They decided to work together in collaboration with others in the university to bring the idea to fruition. “It’s moving forward on all fronts,” said Rohan.

The SUNY Technology Accelerator Fund (TAF) is underwriting research to investigate spectrums of light that are well established to be bactericidal, but are not expected to damage human tissue.

To learn how bacteria respond, Rohan connected with David Thanassi, PhD, a professor in Stony Brook University’s Department of Molecular Genetics and Microbiology and the Center for Infectious Diseases. Dr. Thanassi’s laboratory works with bacteria that cause urinary tract infections, and these bacteria are particularly problematic for patients with catheters.The research team also will be testing for cytotoxicity with human cells in the laboratory.

“Before we develop a prototype, we need to be assured that the way we propose to use the light will not damage or change human epithelial cells,” said Rohan.Through the Office of Technology, Licensing, and Industry Relations, Rohan found a corporate co-sponsor, Michael Bielski, president of DevTech Partners, who was able to identify an expert in catheter product prototyping.

But it is the nursing component that the team believes is essential to the project’s success.“The best of technology will go by the wayside if its users aren’t comfortable with it,” said Rohan. “Bringing nurses into the picture early in the project design phase may be the missing link in how to develop a product that can successfully reduce infection risk.”

“As an academic medical center, Stony Brook University is fertile ground for these types of multidisciplinary collaborations,” said Dr. Kaushansky. “With the breadth and depth of expertise here – including our nurses, physicians and scientists – we can solve resistant clinical problems and bring better, safer healthcare to patients.”