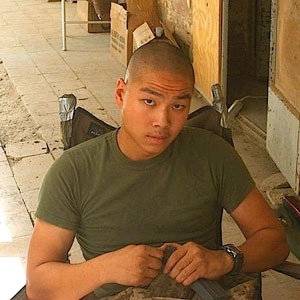 Former leatherneck Tony Wan doesn’t run from challenges; he runs toward them.

Tony, a first-year medical student at Stony Brook University School of Medicine, failed chemistry three times in high school. But after serving two tours of duty in Iraq as a Marine infantryman, he found a reason to master that subject: He resolved to build on his battlefield experiences and help combat veterans suffering from traumatic brain injuries.

Tony travelled a long road to get to medical school. His parents couldn’t afford to pay for college. After 9/11, Tony enlisted, hoping to serve his country and gain experience that would serve him in civilian life.

As a Marine combat lifesaver, Tony discovered that his training landed him somewhere between the roles of EMT and paramedic. Taught to prolong the life of his injured comrades, his knowledge included CPR and how to address traumatic wounds. He could also install neck braces, splints and IVs and stabilize chest wounds while waiting for advanced medical help to arrive on the scene.

He also saw his fair share of  traumatic brain injuries. As a result, Tony developed an interest in neurology.

“Even though our armored trucks protect us from direct injuries caused by explosions, they don’t do a great job in preventing concussions as a result of shockwaves or head injuries caused by the jarring motion of the vehicles over rough terrain,” he said.

Tony completed his undergraduate work at York College, choosing to enroll at Stony Brook because of its affiliation with Northport VA hospital and the Long Island State Veterans Home. He was drawn by the fact that the medical school incorporated veterans’ healthcare extensively in its curriculum.

“VA hospitals are the only lifeline that many veterans have,” he said.

Though it is too early for Tony to declare his specialty, Stony Brook has put him squarely on the path to become a physician.

He said he is open to many fields of medicine, including emergency medicine, vascular surgery, and orthopedics — essentially, any field in which combat injuries can be remediated. Tony doesn’t rule out the possibility of a military medical career.

“If I ever were to re-enlist, it would be due to the fact that the military gave me a life that I could never have imagined. I hope that I could just provide the same opportunity to the servicemen and women who also chose to risk their lives to protect us,” said Tony. “The least I could do is help them return home alive.”