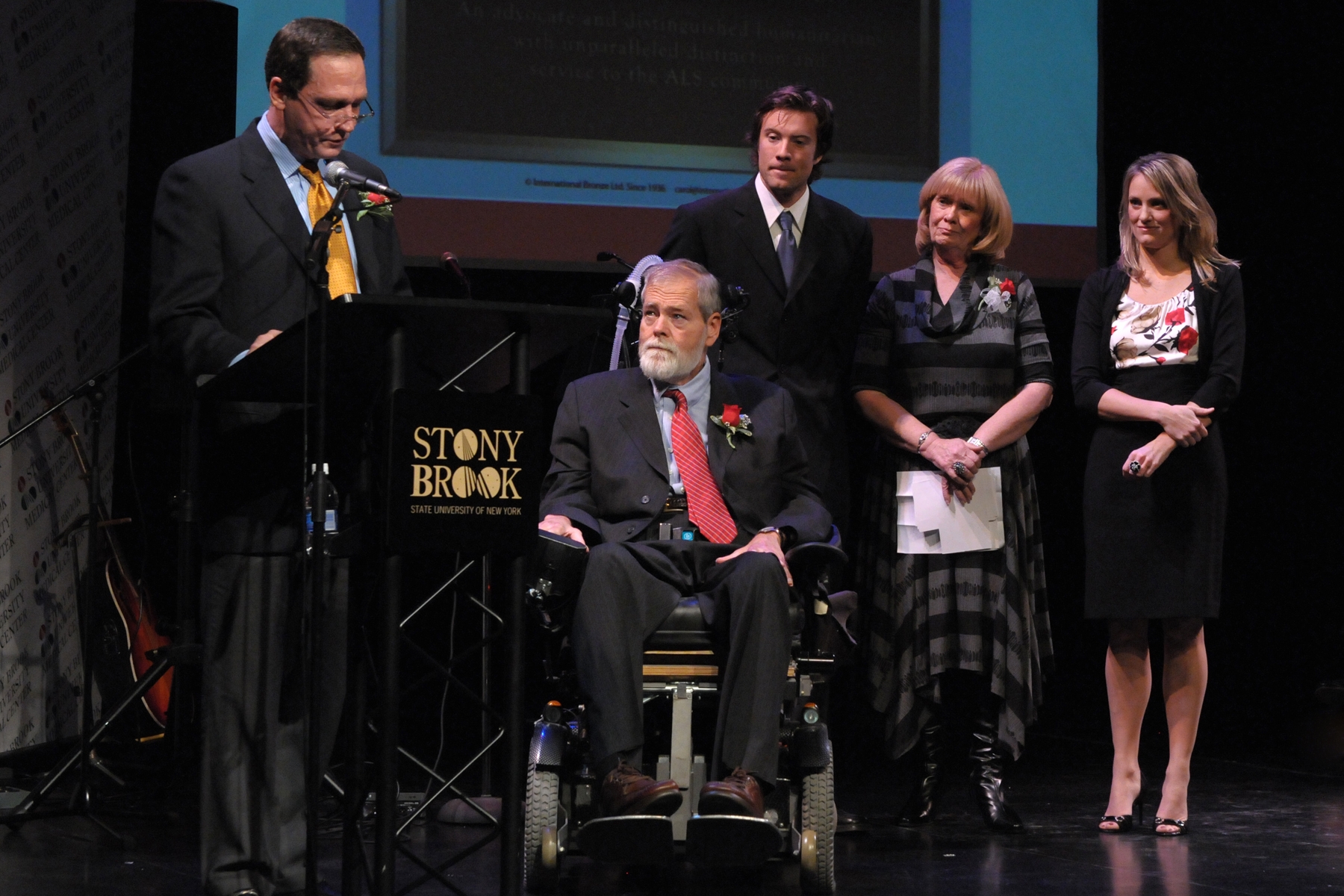 Hundreds came out to support 17-year amyotrophic lateral sclerosis (ALS) survivor and Ride for Life founder Christopher Pendergast at a ceremony marking the renaming of Stony Brook University Medical Center’s ALS clinic to the Christopher Pendergast ALS Center of Excellence, an ALS Association Certified Center. The rousing celebration took place in December in the Charles B. Wang Center Theatre. Pendergast, nationally recognized for his patient advocacy, declared that ALS would one day be beaten and expressed his hopes that new research leads to a cure of the fatal degenerative neuromuscular disease.

The ceremony included a formal presentation by David Cone, the former New York Yankees perfect game pitcher and honorary chairman of the Ride for Life Foundation, who officially announced the new name of Christopher Pendergast ALS Center of Excellence. A New York State Proclamation was jointly presented by Assemblymen Steve Englebright and Mike Fitzpatrick; and personal congratulations from Senator John J. Flanagan, whose daughter and son were taught by Pendergast at Dickinson Avenue School in East Northport.

Dorine Gordon, President and CEO, ALS Association, Greater New York Chapter, recognized Pendergast and his family as integral to the mission of the ALS Association in advancing treatment for ALS patients and seeking a cure. She cited Chris as one of the impetuses behind the national ALS registry, which officially started October 19, 2010. Concluding the ceremony, a Pendergast family friend, Mary Timons, performed a beautiful rendition of “Angels Among Us” to a time honored slide show of Pendergast’s life, before and after ALS.

“This is a wonderful and very special honor. I accept it with much humility and deep appreciation,” said Pendergast, in a written speech on the ALS Center being named for him. Because speaking is difficult for Pendergast, and he often needs a ventilator to breathe, the speech was delivered verbally with the assistance of his son, Buddy, his daughter, Melissa Scali, and his wife Christine. “What a remarkable chance life has given me. Friends, I know you share the belief that beating ALS is work worth doing,” he expressed, surrounded by his entire family, friends, Stony Brook leadership, physicians and nurses of the ALS treatment team, and elected officials.

Being the recipient of such a gift is a role reversal for Pendergast. For the past 17 years, he has been the one giving the gifts to those with ALS. Each May, on behalf of his Ride for Life Foundation and accompanied by other patients and supporters, he makes a power wheelchair ride of more than 100 miles from Montauk to Manhattan’s Columbia University. New York Yankees legend Lou Gehrig, an ALS sufferer, went to Columbia. Through the Ride, Pendergast has raised well in excess of $3.5 million for ALS research and patient services.

“There are the 50 patients from the Ride who have fallen, unable to make it to the finish line,” Pendergast continued. “There are scores of friends, hundreds of supporters, and countless well wishers. What I am today is the result of all their efforts. I am an ordinary man, thrust into an unusual situation who received extraordinary help.”

None of the event participants or attendees would consider Pendergast an ordinary man. The ceremony highlighted his many years of amazing advocacy work. Also featured were the emergence and growth of the ALS Center and Pendergast’s critical role in it. Clips of television segments and newspaper reports illustrated local and national recognition of his efforts and extraordinary journey with a crippling disease.

Historically, Chris was the major force behind the opening of the ALS clinic at Stony Brook in 2002. It is the only one on Long Island and one of only 34 certified by the ALS Association nationwide. With Ride for Life proceeds he has donated about $400,000 to the clinic for its wide-ranging services.

The Flu and COVID: A Conversation with Your County Health Commissioner, Nov. 16