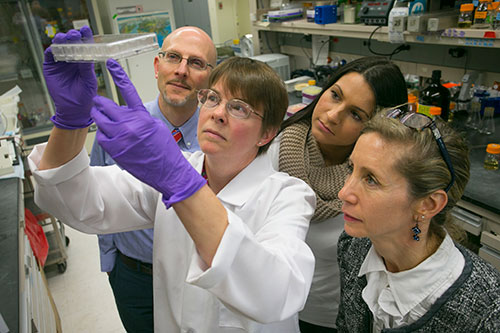 SUNY ranked 38th in the “Top 100 Worldwide Universities Granted U.S. Utility Patents for 2016,” according to the National Academy of Inventors and Intellectual Property Owners Association, which publishes the ranking annually based on U.S. Patent and Trademark Office data.

SUNY campuses overall were awarded 57 U.S. utility patents. Among those from Stony Brook University is a redesigned a catheter developed by a multidisciplinary team led by Annie Rohan from the School of Nursing. The catheter incorporates LED lights to reduce the likelihood of infection after the device is inserted into a patient’s body.

“Across SUNY, our faculty and students partner to make groundbreaking discoveries in a broad spectrum of areas,” said SUNY Chancellor Nancy L. Zimpher. “Through more than 1,300 U.S. patents earned to date, SUNY research has led to hundreds of new technologies and advances that address society’s greatest challenges and have a positive impact on quality of life in New York and beyond. Congratulations to all those at SUNY whose important work has elevated us to this prominent world ranking.”

Stony Brook Engineers Employ New Device and Neural Networks with Terahertz Spectroscopy An important component to a more successful treatment course for burns is correctly assessing them, and current methods are not...