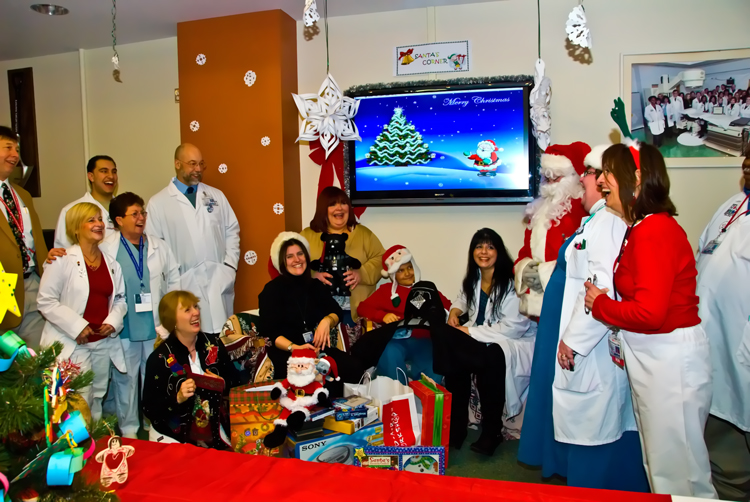 Eight-year-old Zach Sheikh was overjoyed when the doctors, nurses, and staff of the Department of Radiation Oncology at Stony Brook University Medical Center surprised him on December 22 with a special party and gift, his Christmas list fulfilled. Zach has Rhabdomyosarcoma, a form of childhood cancer, and is undergoing therapy at SBUMC. He took a break from treatment and relished in the moment when Santa delivered his gifts, among them a boom box, DVD player, iPod touch and tunes, and a train set.

The SBUMC Radiation Oncology team collectively decided to help one of their youngest patients and his mother, Michele Sheikh, around the holidays. Zach and Michele have had a trying 2009, as his father passed away earlier in the year and Zach was diagnosed in November. In addition to the gifts, the Department collected more than $1,200 in donations to help the family of two.

Every year, the physicians and staff of Radiation Oncology hold a holiday toy and clothing drive for the families of those treated through the Department. In addition to the drive, this year they were moved to make Christmas special for Zach. Once they got hold of Santa Claus, the holiday party and gift delivery was a go.

Zach will continue his radiation treatment in 2010, as well as chemotherapy and follow-up care through SBUMC’s Pediatric Hematology/Oncology Division.