Such repair by evolution may provide a basis for regaining lost gene function, which has implications in medicine and other scientific endeavors. Genes often mutate and lose their natural or synthetic function over long-term evolution, which could be beneficial if that stops drug resistance to infectious microbes or cancer.

“We showed through these experiments and computational models that many drugs can activate mutant resistance genes through this process,” Balázsi said. “Essentially we exposed mutant, drug-sensitive cell populations to conditions where regaining resistance would be beneficial, and we found adaptation scenarios with or without repairing lost gene circuit function.”

A team of international physicists including SBU's Jennifer Cano has created a superlattice, which at a high temperature is a super-efficient insulator conducting current.

The work of Stony Brook researchers in Antarctica has been highlighted by a CBS News article, Global warming cited as Antarctica’s chinstrap penguin population drops by half, which details live coverage by a CBS News... 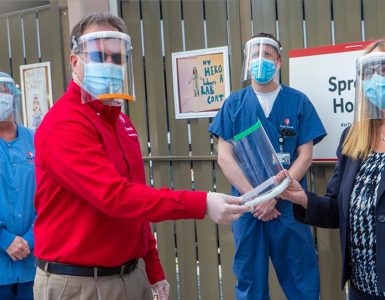 Stony Brook University’s iCREATE Lab has delivered 5,000 3D-printed face shields to caregivers on the front lines in the fight against the coronavirus at Stony Brook Medicine. The final delivery to Stony Brook...