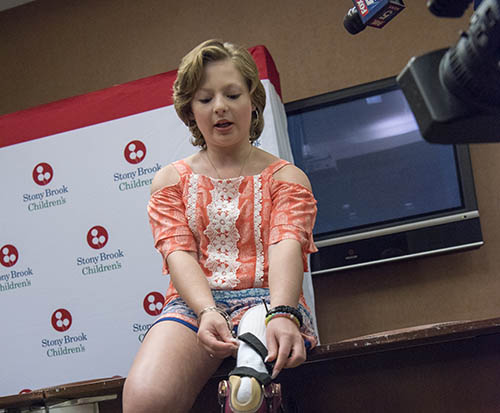 Delaney Unger has always met the world with a smile. And the talented young dancer is known for her energy and drive. So it was a shock when Delaney was diagnosed with a rare type of bone cancer.

For a while, it looked like twelve-year-old Delaney might never dance again. But now she’s dancing and pursuing her dreams, thanks to a surgical procedure at Stony Brook Children’s Hospital that transformed her ankle into a knee and preserved her mobility.

Delaney was diagnosed with osteosarcoma, a rare type of bone cancer, in her left leg just above the knee. While still reeling from the diagnosis, she and her parents Noah and Melissa had to decide on treatment options.

Delaney herself, with support from her parents and physicians, chose to undergo a 13-hour rotationplasty surgery. First the bottom of her thigh bone, knee and part of her lower leg were surgically removed. Then her lower leg, rotated 180 degrees with its foot facing backward, was attached to her thigh bone. Her ankle joint was placed in the position of the knee to create a natural, functioning knee joint.

Delaney received a prosthesis which fits over the backwards foot and extends up the thigh. This allowed her to have motor power to walk, jump, dance and play. The toes provide important sensory feedback to the brain.

But knee replacement would restrict Delaney’s mobility, sidelining her from the active life she loves. “With a knee replacement, we would have had to tell Delaney not to do dance or do anything strenuous,” said Dr. Khan.

Dr. Ganz said there was careful pre-surgical planning, to ensure that Delaney’s incisions would heal properly after the surgery and that her ankle would function well in its new role as her knee. “At this point, it’s incredibly rewarding to see her as a normal kid again,” he said.