Cancer Survivor Gives Back to Hospital that Saved Him 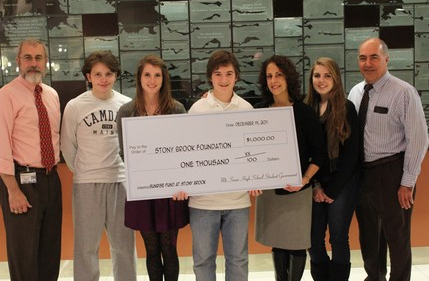 When other children’s lives revolved around watching cartoons and playing with toys, Billy Brennan’s world was filled with extended stays at Stony Brook University Medical Center after he was diagnosed with acute lymphocytic leukemia at 2 years old.
After battling the disease for several years, he relapsed at age 6 before defeating it again. After being in remission for the last decade, Brennan, 16, along with the Mount Sinai student government, donated $1,000 to the hospital in support of the Sunrise Fund, which raises and donates money to improve facilities for families with a child battling cancer at Stony Brook. Billy’s mother, Maureen, started the fund with Susan Shiebler, who also had a child at Stony Brook University Medical Center.
“I had always thought about donating to the Sunrise Fund after what they did for me,” Brennan said minutes after presenting the check to Dr. Robert Parker, who is director for the division of pediatric hematology/oncology at Stony Brook as well as Brennan’s doctor throughout his bout with the cancer. 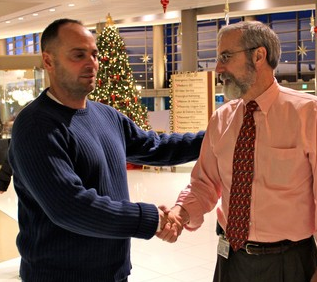 His father, Bill Brennan, was happy to see his son give back to the hospital after all the staff there did for them. “We’re just thankful for the people at Stony Brook and the way they took care of our family when we needed it the most,” said the elder Brennan. “They do a wonderful job here and I always recommend that if people want to donate, this is a good place” to do so.
Billy Brennan became a senator in the student government last year and began to lobby for a donation to the hospital. This year, it was his fellow members who made his dream a reality following a successful fundraiser at the school. “My fellow student council members actually voted on it while I was absent,” Brennan said. “I was not at the meeting and they decided to do it for me, so I’m very grateful to them.”
In addition to the donation made to Stony Brook University, the school also donated $1,000 to the Lymphoma and Leukemia Society.
Although he is in remission, Brennan must still return to the hospital once a year for a checkup, which allows him to keep in touch with his former doctors, including Dr. Parker. “It’s always nice to see Dr. Parker and the nurses again because I knew them for a large part of my life when I was younger, so it means a lot to be able to see them every once in a while,” he said.
According to Dr. Parker, Brennan’s form of leukemia is the most common form in young children. The disease attacks bone marrow and prevents white and red blood cells from growing, which could make a person become anemic while also increasing their chances of developing an infectious disease.
He remarked on how gratifying it is in medicine to see a young patient grow up to lead a normal life. 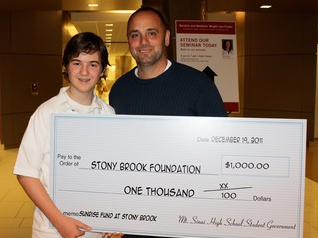 “There isn’t anything better — except maybe watching your own kids grow up — because you see these kids and they really become part of your family,” he said. “We consider the kids our family and we want to treat them as family.”
Dr. Parker’s division is part of the Stony Brook Long Island Children’s Hospital as well as the university’s Cancer Center.
Brennan said it is hard to believe it’s been 10 years since he was a regular at the hospital.
“It is weird when I look back at it to think that I actually went through all the horrible things that went on,” he said. “I’m thankful that I made it through with the help of these people and I could be happy and live my life.”
Less than a week before Christmas, Bill Brennan said his holiday wishes have already came true. “I already have my Christmas present,” he said while standing at his son’s side. “My son has been healthy for 10 years now.”