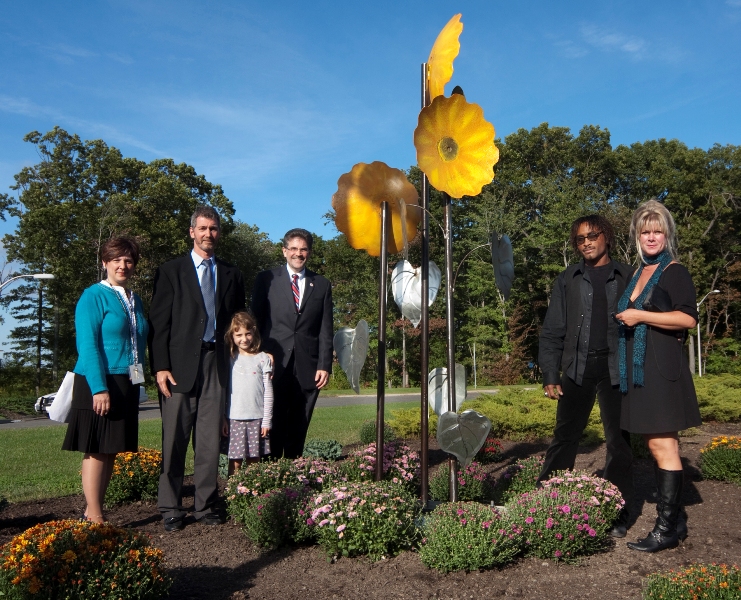 To symbolize hope and new life, the Stony Brook University Cancer Center unveiled a large and colorful sculpture depicting sunflowers, which stands near the entrance of the outpatient center, during a ceremony honoring gynecologic cancer patients on September 21. Donated by a local artist, Cruz, the sculpture is a gift to SBUMC in honor of the care his wife, Patricia Hills Cruz, received through the Division of Gynecologic Oncology.

When Cruz and Patricia learned earlier this year that she had a pre-cancerous condition that could develop into cervical cancer, they did not know what to do. They researched which doctors in the area specialized in gynecologic oncology and decided to see Michael L. Pearl, director of Gynecologic Oncology at SBUMC. What resulted was a surgical procedure performed by Pearl, and follow-up care, which led to a cure of the condition.

The couple views Patricia’s story and end result as a hopeful one to the many women with pre-cancerous or cancerous gynecological conditions. September is Gynecologic Cancer Awareness Month. According to the American Cancer Society, more than 80,000 new cases of gynecologic cancer will be diagnosed nationwide in 2009 with more than 27,000 deaths. Cruz, Patricia, and the Cancer Center staff believe that when patients look at the “sunflowers” upon entering the building, the sculpture will help convey positive thoughts about life and health.

Made from the metal of a 100-year-old plow, the sculpture is one of many creations by Cruz, whose passion is creating different types of sculptures from scrap metals.

The unveiling of the sculpture was coupled with a candlelight celebration, where 29 gynecologic cancer survivors joined with SBUMC doctors, nurses, staff, and their families honoring all survivors and families affected by ovarian, uterine, cervical, and other forms of the disease.