Alessandra Riccio ’18 is Motivated to Heal 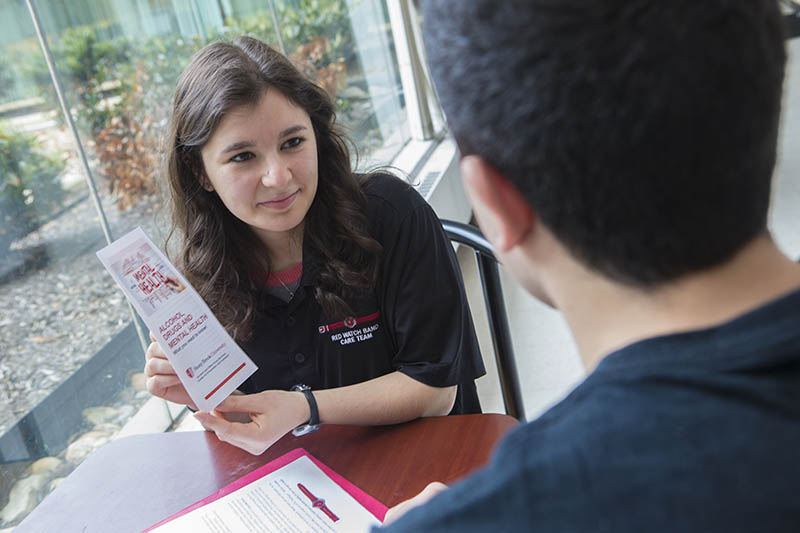 Some students enter the medical field inspired by television shows such as “Grey’s Anatomy.” Others are called by a personal experience.

Such was the case for Alessandra Riccio ’18, who lost her cousin, Kristin Molini, at the age of 25 after a seven-year battle with a gastrointestinal disease that resulted in a five-organ transplant.

“I was 10 years old at the time and she was in and out of hospitals and constantly going to the doctor,” said Alessandra. “She was on a J-tube to drain her intestines and I specifically remember a moment when she wanted me in the room when she got it changed. She was my motivation to pursue biochemistry at Stony Brook.”

Alessandra said that she chose Stony Brook for two reasons — its proximity to a teaching hospital and the University’s high number of world-renowned faculty researchers.

The Stony Brook experience has exceeded Alessandra’s expectations. As an assistant on both the Mother Infant Cognition (MICA) project and the Shaping Neural Activity Through Parenting (SNAP) project, Alessandra has had ample opportunities to engage in research.

“For the MICA project, I observe the interactions between mothers and their babies and quantify how nurturing mothers are,” she said. “We also collect demographic data and conduct questionnaires that we hope to validate as part of our screening process for a parenting intervention we hold in Brownsville, Brooklyn. This intervention is a multi-week program in which parent coaches help mothers interact with their children in a more positive way to help foster healthier childhood development.”

Alessandra said that her research team is observing children’s levels of cortisol, a stress hormone, and their relation to a child’s home environment.

In a pharmacology wet lab with Department of Pharmacological Professor Joav Prive, Alessandra is working with signaling pathways labelled NOTCH pathways and a protein called dystroglycan, which are both key aspects of muscle cells. She is trying to discern how NOTCH interacts with the protein to maintain a steady population of muscle stem cells that can be used for repair following injuries.

Alessandra has become interested in emergency medicine due to her experiences shadowing Dr. William Goldenberg in the Stony Brook Emergency Department.

“My apprehension about the field of emergency medicine, which perfectly aligns with my interest in being the first person to figure out the cause of a patient’s symptoms, was my lack of continuity of care and exposure to physician-patient relationships. However, this apprehension was diminished as I worked with Dr. Goldenberg, who connected to each person by sharing a personal experience about his time in the military,” said Alessandra.

Through the Stony Brook program Volunteers Around the World, Alessandra was able to travel to Guatemala to provide free clinical services and medications to underserved patients in makeshift clinics that were actually classrooms and churches. At one clinic, she worked with a 13-year-old patient who was diagnosed with a potentially fatal cardiac valve failure.

“As the doctor told her this, she learned that the nearest cardiac surgeon was three hours away from there and she could not afford the operation,” said Alessandra. “She received that news by herself, with no support and learned something that someone her age should not have to face alone. That is when I learned the meaning of empathy. I witnessed extreme patient conditions and obstacles while in Guatemala and I strive not only to help patients from a medical standpoint, but also to act as a resource for individuals who might have nowhere else to turn.”

Alessandra is a member of BioElite, an organization developed for students in the top 1 percent of the BIO 204 class. Her responsibilities include attending networking events with Stony Brook administrative staff and engaging in conversations about her experience as A STEM (Science, Technology, Engineering and Mathematics) student. She also garnered the Most Involved Scholar Award during spring 2016 for both her academic success and her leadership roles in the community.

As a University Scholar, Alessandra is expected to perform community service and assume leadership roles apart from academia. Alessandra chose to become a Red Watch Band CARE Team trainer, which entails facilitating discussions with students about the harmful effects of toxic drinking and what it means to be an active bystander.

“I love my role as a CARE team member because of how diverse our team is,” said Alessandra. “We have different communities to target athletes, residents, commuters and Greek life members.”

As diverse as she finds campus life, Alessandra said that there is a unifying thread that ties her fellow researchers together. “Out in the ‘real world,’ you probably won’t find many people who are excited about the bacterial defense mechanisms that are used in genetic studies, but at Stony Brook University, zealous and passionate students are everywhere.”