SBU News > Medicine > A Marriage Made in Medicine
MedicineStudent Spotlight

A Marriage Made in Medicine 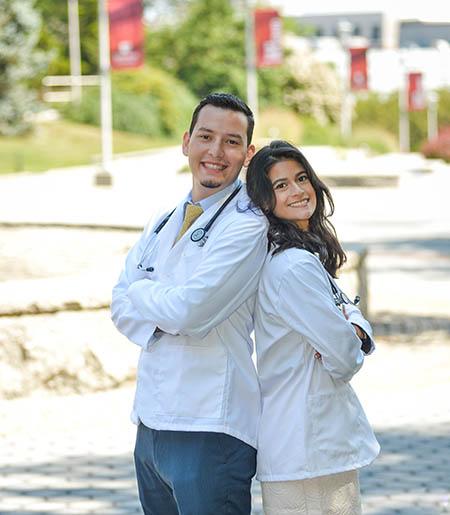 “We met in a biology lab course.”

This is not a claim you hear many married couples make — unless, perhaps, they’re a pair of Stony Brook med students.

While pipettes and petri dishes may not provide a traditional backdrop for romance, other factors helped Monica and Jheison Giraldo find common ground on that fateful day.

The Colombian bracelet that Jheison was wearing played a major role.

Monica recalls that Jheison was making up a lab during her class time and when she saw the bracelet she immediately let him know she was also from Colombia, “as most Colombians tend to do.”

They got to sharing stories and learned that they came from different states, or “departments,” as they are known in Colombia. And serendipitously, Jheison came to the United States with his family in 1999 and Monica arrived in 2002.

“I was born in Cali, Colombia and he was born in Medellin,” says Monica. But they were both raised on Long Island with a lot of family around. Monica grew up in Bethpage and Jheison was raised in Brentwood.

As their relationship strengthened and grew in the midst of two hectic schedules they managed to find time to watch movies, explore parks, hike and care for plants together.

On September 26, 2015, nearly two and one-half years after they met, the Giraldos walked down the aisle together and tied the knot.

As undergraduates they also both volunteered their time as teaching assistants for biochemistry.

One major difference between the two is that Jheison knew as a youngster he wanted to become a physician — Monica chose medicine in her senior year at Stony Brook.

As an undergraduate student, Monica spent three years as a researcher in the Department of Pharmacology but specifically related to the brain and felt that something was missing —the human element of patient interaction.

After graduating from Stony Brook Monica worked at Southside Hospital in Bayshore as a personal assistant to the emergency room physician. As a medical scribe she documented patient visits and records and used her ability to speak Spanish to help patients understand how to navigate the health care system and find their way around the hospital.

In order to serve the community in which he was raised, Jheison became an EMT volunteer with the Brentwood Legion Ambulance.

Jheison’s exposure to the real world of medicine continued in 2015 as a medical assistant at Three Village Allergy and Asthma in South Setauket  where he has been for the past two years. He also served as an emergency response educator at the Arrowhead and Eugene Auer Elementary Schools under the tutelage of Dr. Anthony Szema.

This past August, Jheison and Monica enjoyed another rite of passage together when they went through Stony Brook University School of Medicine’s 20th annual White Coat Ceremony with 134 other Stony Brook students at the Student Activities Center Auditorium on east campus.

“Going through this ceremony was an amazing accomplishment for us,” says Monica. “We are both grateful to our families who worked extremely hard for many years to give us the opportunities and tools to get us to this point in our lives. They taught us dedication and perseverance and the white coat ceremony felt like a culmination of all of those things to us.”

Today this bilingual couple share all of their classes as medical students and study together to build upon another of their shared languages — medicine.

And like every couple, they have their own interests. Jheison’s primary passion is dance — he minored in dance as an undergraduate. Monica lifts weights as part of her daily routine.

“Still we try to keep our schedule organized where we allow time for each other every single day,” says Jheison.

It’s still too early for either Jhesion or Monica to determine what branch of medicine they wish to specialize in but Monica is leaning towards neurology and geriatrics and Jheison is gravitating toward internal medicine.

“Our short-term goals are to pass anatomy and biochemistry and long-term goal is to strike a balance between family life and work,” says Jheison.