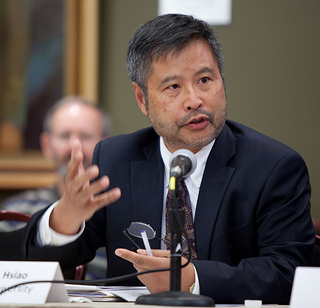 The Science Coalition, an organization of 50 leading public and private research universities in the United States, recently hosted a roundtable discussion with a select group of senior research officers from top universities and science media in Washington, D.C. Stony Brook University Vice President for Research, Benjamin Hsiao participated in the discussion, which focused on the importance of sustained federal funding for research to help drive the nation’s economy; maintain global competitiveness; spur innovation and create strategic partnerships between government, research universities and industry.

The group discussed the evolution of research universities into regional hubs of innovation, international collaborators and partners for economic growth and how to maintain those roles in the face of current and looming fiscal challenges. They highlighted a recent report from the National Research Council that emphasized the vital role of research universities in our nation’s health, security, economy and standard of living. They also cited the need for regulatory reform to maintain accountability in research while directing fewer resources to administrative reporting and documentation. The group noted the necessity of strategic partnerships and the need to increase collaboration between research universities and business while avoiding any conflicts of interest that may arise.

The Science Coalition is a non-profit, non-partisan organization dedicated to expanding and strengthening the federal government’s investment in university-based scientific, medical, engineering and agricultural research.

Listen to the Roundtable online.