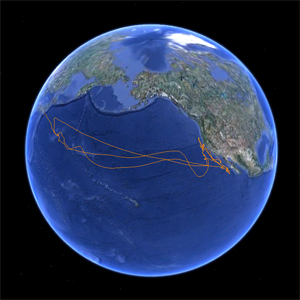 Bluefin tuna exposed to radioactivity that leaked into the Pacific Ocean after Japan’s Fukushima Dai-ichi power plants were damaged by an earthquake and subsequent tsunami on March 11, 2011, carried that radioactivity to the waters off California, a new study by scientists from Stony Brook University’s School of Marine and Atmospheric Sciences (SoMAS) and Stanford University’s Hopkins Marine Station has revealed.

And while the radioactivity levels in the Pacific bluefin tuna posed no public health threat, these findings represent the first documented instance of the transport of radioactive materials in the sea through a biological migration. The study, “Pacific Bluefin Tuna Transport Fukushima-Derived Radionuclides from Japan to California” has been published in Proceedings of the National Academy of Sciences of the US. The research was funded by the Gordon and Betty Moore Foundation,

SoMAS professor Nicholas Fisher and postdoctoral scholar Zofia Baumann and Daniel Madigan of Stanford measured the levels of two radioactive isotopes of cesium in bluefin tuna caught in August 2011 off the coast of San Diego, California. Pacific bluefin tuna spawn in the western Pacific and many migrate in their first or second year to the waters of the eastern Pacific. Analyzing the radionuclide content in top marine predators such as bluefin tuna should provide unequivocal evidence of migratory routes and timing of these animals, the researchers concluded.

Such information would complement other migratory tracking tools and be useful for management and conservation of key fisheries and possibly other endangered species. The findings also demonstrate the interconnectedness of distant eco-regions, where events in one can be linked to findings in another region, even thousands of miles away.

“While the radioactivity levels in bluefin tuna caught in California in August 2011 were only about 3 percent above the natural background radioactivity, levels in this year’s bluefin may be higher, given that they would have been exposed to radioactive food and water for about one year prior to migration, unlike in 2011 when they were exposed for only about one month,” Fisher said. “However, radiocesium concentrations have become diluted and dispersed since the disaster occurred, and so the public health aspects will remain unclear until this year’s tuna are analyzed. We are now preparing to do that.”

“We were surprised to find this radioactivity in all bluefin tested, but we were also surprised that, to our knowledge, no other animals far from Japan have been tested,” added Madigan. “From a terrible event, we have found what should prove to be a very useful tool to examine migratory patterns of Pacific bluefin tuna and many other important species in the Pacific Ocean. These also provide a clear example of nature simply being amazing. Radiocesium made it to California not by wind or ocean currents, but packaged in the muscle of a fish species that swims across the biggest ocean on the planet.”