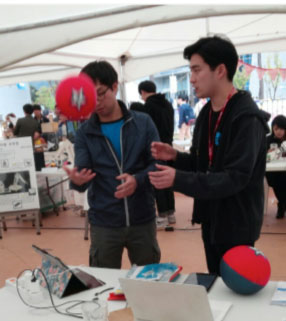 The ATL Ball is a physics educational tool designed for early university physics classes. It allows students to study physics in an intuitive and natural way.

The SUNY Korea delegation will join 170 international teams and 20,000 visitors at one of the premiere events associated with the burgeoning Maker Movement.

Maker Faire is an international consortium of organizers for events held around the world that display devices or systems — including electronics, artwork and educational products — invented or made by individuals or small groups.

The SUNY Korea Team was invited to the Beijing Maker Faire after its much-praised  demonstration of the ATL Ball at the annual Seoul Maker Faire in October. SUNY Korea, a partnership between Stony Brook University, SUNY, and the South Korean government, was established in 2012 as the first American university in Korea.