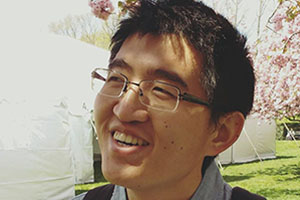 Stony Brook alumnus Qi Sun ‘18 has been fascinated with augmented and virtual reality for years. For him the idea of fully melding our physical world with a computerized, virtual one holds incredible promise for humankind and opens a world of possibilities for computer simulated experiences.

Sun, 28, was born and raised in China, where he attended Shandong University in his home province. An only child, Sun admits that he wasn’t especially interested in video games growing up. These days, though, it’s a necessity — he’s now developing cutting-edge virtual reality (VR) technology that he hopes will shape the way we work, play and learn in the future.

We talked with Sun — who completed his PhD. this spring in the College of Engineering and Applied Sciences — about why this technology is so important and what the future of VR might hold:

What got you interested in this field?
I have always been passionate about visual and auditory arts. I often thought that the coolest thing would be to merge them together by bringing the beauty of visual art to analytical and computational theories. That is exactly what computer graphics does.

Why did you choose to study at Stony Brook?
Prior to choosing which school I would attend for my PhD, I was following the latest research and reading the top papers in my field. I found that so many top researchers all graduated from Stony Brook’s Computer Science program. One of those researchers, who is a Stony Brook alumni and a famous professor in Israel now, told me that Arie [Kaufman] was a great advisor to him and never stopped him from trying new things. So I decided to join Stony Brook.

What was your experience like while you were a student and intern? How do you feel your experiences prepared you for your career?
I had a lot of fun as a PhD. student at Stony Brook. My advisor, Prof. Arie Kaufman, gave me full freedom to conduct whatever research I wanted to explore without worrying about failures. During that time, I also did research internships at both NVIDIA Research and Adobe Research, two of the major computer graphics giants.

One of the main things I learned is that, in the industrial research side of computer graphics, the top research is not equal to top papers — papers are only a subset of the work we do. What really matters is how that research can influence and inspire both the [people in the industry] and the actual customers and market.

I got the chance to know so many great mentors and friends during the internships. I learned so much from them as well.

Are walking experiences a growing trend within VR? Why would people use it?
The new and popular Steven Spielberg film “Ready Player One” is heavily based on VR technology. As the movie shows, if we want to create VR that will replace our physical world, people will still need to move around their homes, schools or the city while wearing the VR headsets. So the development of technology that allows for natural walking can be critical for VR to progress.

Tell me what the user experience is like. What do they see?
They see a virtual world, e.g., a game scene, through a VR headset as usual. But they do not realize that the virtual world is rotating such that their physical walking path is controlled by our method.

What makes your project different from other walking experiences?
Our method can demonstrate very strong space-saving in the physical world while creating an infinite walking experience in the virtual world. This occurs without introducing any virtual scene distortion, which was common in the past.

How do you use movements of the eyes to create this infinite walking experience?
We are momentarily blinded during saccade, which is an inevitable and subconscious fast eye movement. That is mainly because our brain has to process too much information captured by the eye within a short period of time. If we rotate the virtual world in VR in time with these movements of the eyes, the user won’t notice.

Imagine when we want to walk down a straight street, but the street keeps rotating clockwise — we will end up walking along a curved path.

What are the applications for this walking experience?
It can be used for a variety of applications, such as VR gaming, remote education/training and architectural design, to name a few.

Using a keyboard and mouse to do our work, or a controller to play video games, aren’t natural experiences. We interact with the world by moving around. This technology creates a more natural experience — you can be a part of the virtual world in a game. In the future, we may not need to type or look at a monitor on a desk to do work. An architect could walk inside and examine a building he is designing before construction begins. A virtual classroom could be more like a real one, rather than just watching a lecture video and typing responses on a message forum.