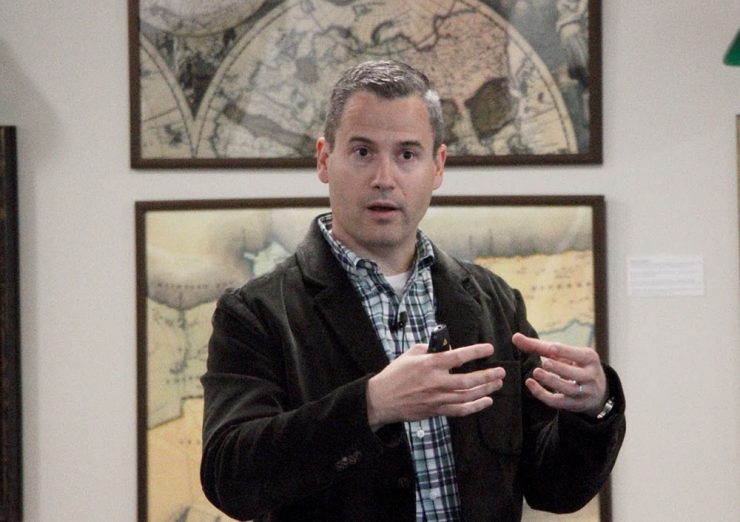 On average, the distance between Mars and Earth is about 140 million miles. But even that great distance is not too much to prevent a Stony Brook professor from helping scientists investigate signs of past life on the Red Planet.

Geochemist and planetary scientist Joel Hurowitz, an assistant professor in the Department of Geosciences in the College of Arts and Sciences, is contributing to the far-reaching interplanetary investigation through his work on an instrument called PIXL – an acronym for Planetary Instrument for X-Ray Lithochemistry.

“Everything NASA does requires an acronym,” joked Hurowitz, as he began his STEM lecture titled “The PIXL Investigation on the Mars 2020 Rover Mission: Investigating Ancient Environments and Searching for Signs of Past Life on Mars,” which took place on April 30 in the Melville Library’s Special Collections Seminar Room.

“PIXL is an X-Ray spectrometer similar to the X-Ray machines you might find in a dentist’s office,” Hurowitz explained to attendees. “It lets us measure the chemical composition of rock and soil.”

Hurowitz, working with Abigail Allwood, astrobiologist at the NASA Jet Propulsion Laboratory and principal investigator for the PIXL Instrument on the Mars 2020 Rover mission, was part of a team of 50 people that designed the planetary instrument, one of the most complicated instruments ever sent to the surface of another planet.

Described as looking like “a Star Wars stormtrooper’s lunch box,” the instrument mounts on the arm of the rover and positions itself with three pairs of legs. It then traverses the Martian surface in 100-micron-size steps – about the thickness of a single piece of paper – analyzing the chemical makeup of the terrain along the way.

Hurowitz said the initial concept was developed by Allwood while investigating the role microbes played in forming 3.5 billion-year-old rock samples found in her native Australia. Realizing a functional parallel to the exploration of other planets, she initiated a project to modify the existing technology for use on Mars.

An initial proposal to develop the technology was sent to NASA in 2013. Hurowitz says the PIXL’s mission on the Rover is two-fold:  1) help scientists decipher the information rocks tell about the environments they were deposited in, and 2) look for evidence that might help determine if there was ever life on Mars.

Hurowitz had previously led a team of 22 international scientists using findings beamed to Earth from NASA’s Curiosity rover, which landed on Mars in August 2012, to determine that a freshwater lake in Mars’ Gale Crater was stratified. The importance of that finding is that depending on the depth, its water created several co-existing environments where life could flourish, much like the lakes on Earth.

“The technology at the time could only analyze areas of a certain size,” said Hurowitz. “We needed to analyze much smaller sections and that’s exactly what PIXL can do. Each individual component tells us something about the rock and its history. Fine-scale chemical information might help us detect biosignatures.”

Hurowitz stressed that the mission is look for past life, not life today.

“Our goal is to learn if life ever existed on Mars,” he said. On Earth, evidence of life is preserved in river beds, lakes and seas; PIXL will look for similar evidence on Mars.

And despite their reputation for unwavering stoicism, even scientists get caught up in the universal excitement of a mission to Mars.

“It’s hard not to get emotionally involved,” admitted Hurowitz. “I’ve spent a good part of my career on this. I’d hate to think we’d be so completely wrong about the scientific potential of the Mars 2020 landing site after all that has been put in, so we have certain expectations about what we’ll find there. But whether we find signs of Martian life there or not, we will learn something.”

The Mars 2020 Rover is scheduled to launch from Cape Canaveral in July 2020, touching down in Mars’ Jezero Crater in February 2021.