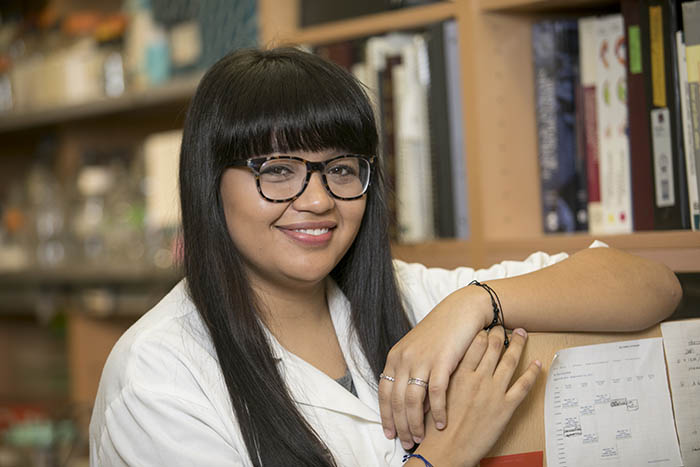 Maria Anaya and Wilson Nieves, recently named URECA Researchers of the Month, have a lot in common. Both are passionate about research, and have had transformative summer research program experiences, both on and off campus.

Both recently presented at the Annual Biomedical Research Conference for Minority Students ( ABRCMS) conference in Phoenix, Arizona. Both began their Stony Brook research experiences in the summer of 2016, as participants in I-STEM’s BioPREP program as well as the NIH-funded Initiative for Maximizing Student Development: Maximizing Excellence in Research for Graduate Education (IMSD-MERGE) Program administered through CIE. Both previously attended Queensborough Community College (QCC). Both are immigrants; both are first-generation college students.

Maria Anaya: Maria is a Biology major (Neuroscience specialization). She started doing research at SB in the summer of 2016 working in the laboratory of Dr. Stella Tsirka (Pharmacological Sciences) where she has been examining whether Pluronic F-127 can be used as a drug delivery agent to deliver Pifithrin-µ (PFTμ) and improve Spinal Cord Injury. In addition to IMSD, Maria also participates in LSAMP; and has served as a TA in Anatomy for CSTEP. Maria plans to pursue MD/PhD degrees, and this summer participated in the Pre-MSTP Life Science Summer Research Program at the University of Minnesota where she did research and neonatal care training under the direction of Dr. Michael Georgieff and Dr. Phu Tan. Maria has presented at numerous conferences, including the ABRCMS national Conference, the Columbia Undergraduate Research Symposium, and Sigma Xi North Eastern Regional Symposium. She moved to the US from Colombia at age 6 and attended the High School of Fashion Industries prior to obtaining an Associates degree from Queensborough Community College as a Forensic Science major.

Wilson Nieves: Wilson is a Biochemistry & Physics double major, with a minor in Philosophy. He started doing research at SB in the summer of 2016 under the mentorship of Dr. Jarrod French ( Chemistry, Biochemistry & Cell Biology Departments). His research involves building novel spectrophotometric assays for the in vitro study of pyrimidine transporters, and is currently supported with funding from IMSD-MERGE and from LSAMP.  In summer of 2017, Wilson participated in the Amgen Scholars program at Washington University in St. Louis, working with Dr. Michael Gross ( Chemistry) on developing broad-based labeling reagents for protein footprinting. Wilson has presented at numerous conferences, including the ABRCMS national Conference, the SACNAS National Conference, the Amgen Symposium, and CSTEP Conferences. Wilson plans to pursue a PhD in biophysics after graduating from Stony Brook. Wilson immigrated to the US from Ecuador at the age of 16.  After graduating from John Adams HS in Ozone Park, he completed an Associates degree in Math and Science at Queensborough Community College.

Both Anaya and Nieves credit the IMSD program & their recent summer research experiences with changing their lives, helping them to not only discover their path but giving them the confidence to pursue it.

“A lot of people who are first-generation college students never even knew  the possibilities that are out there,” Anaya said. “I am so grateful that in college I was exposed to all the things that I could do so that I could say: ‘I have a passion for this and therefore I can do that.’”

“I had so many amazing experiences,” Nieves said. “Before the program, I wasn’t really even sure if I was able to pursue this path of research. But over the summer, the whole program made me believe in myself and gave me more confidence of where I can actually go to graduate school. ” 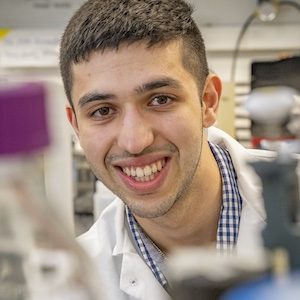