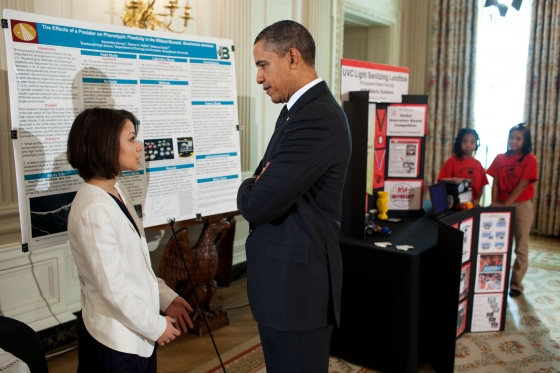 Brentwood High School student Samantha Garvey, whose triumph over adversity made national headlines in January, met with President Barack Obama when she participated in the second White House Science Fair on February 7.

Garvey was chosen as an Intel Science Talent Search semifinalist after being mentored by Stony Brook University Professor Dianna Padilla from the Department of Ecology and Evolution. The child of immigrants from wartorn El Salvador, Garvey conducted her research even as her family lost their home and were forced to relocate to a homeless shelter. A 2011 Simons Summer Research Fellow, Garvey spent many hours conducting research at Flax Pond and in Padilla’s laboratory.

The White House Science Fair, hosted by President Obama, featured research and inventions from more than 100 students representing 30 student teams. From robots in the Blue Room to rockets in the Red Room to marshmallow cannons in the State Dining Room, projects showcased the talents of America’s next generation of scientists, engineers, inventors and innovators. After viewing some of the displays and talking with students about their work, the President addressed students, parents and teachers in the East Room.

“When students excel in math and science, they help America compete for the jobs and industries of the future,” said President Obama. “That’s why I’m proud to celebrate outstanding students at the White House Science Fair, and to announce new steps my Administration and its partners are taking to help more young people succeed in these critical subjects.”

Not enough students are studying subjects like science, math and engineering to fill the jobs of tomorrow. A report released yesterday by the President’s Council of Advisors in Science and Technology found that one million additional graduates with so-called STEM degrees (Science, Technology. Engineering and Math) are needed over the next decade to fill the growing number of jobs that require these skills.