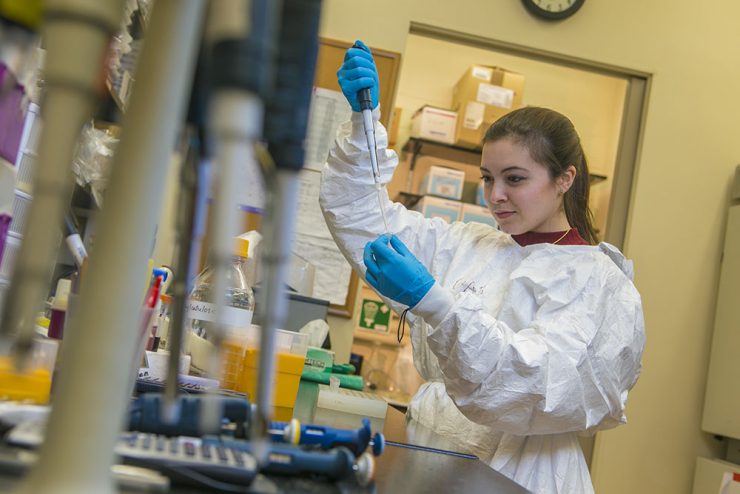 The United States spends more on research and development (R&D) than any other country, but that fact tells only half the tale. R&D spending growth has slowed in the U.S. while surging in other countries.

China saw a 7.9% year- over-year increase in R&D spending from 2016 to 2017, according to the Organisation for Economic Co-operation and Development, while Germany experienced a 5.8% increase. That’s compared to 3.2% growth in the United States. 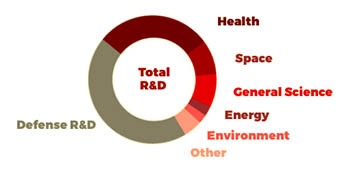 Also relevant: Only a portion of R&D spending is devoted to scientific research. According to the American Association for the Advancement of Science (AAAS), in 2017, close to half of funding – 44.3% – was allotted to defense R&D. Non-defense R&D received the lion’s share at 55.6%, and of that only 29.2% was allocated toward health, 8.7% to space and 8.3% to general science.

“Historically, most funding for science, medicine and engineering for fundamental work has come from the U.S. government,” says Richard J. Reeder, Stony Brook’s vice president for research. “But we’ve seen almost a decade of scientific research funding having been almost flat.”

As the U.S. government’s financial commitment to scientific research has largely stalled over the last decade, universities like Stony Brook University are stepping up to the task of funding research. In fact, the National Science Foundation reports that universities internally sourced 25% of all R&D expenditures in the fiscal year 2017, up 4.7% from 2016 and doubling the share from the 1970s.

According to Reeder, high-risk, high-reward scientific investigation that ultimately led to technologies like the iPhone and magnetic resonance imaging (MRI) will not occur without funding for fundamental research. The invention of the iPhone 1, for instance, depended on funding for basic science discoveries such as the Internet, GPS and wireless technology. When that funding is at risk, so is the country’s place as a global leader in scientific inquiry and discovery.

The Critical Benefits of Basic Research
“The average person doesn’t realize how much research goes into basic products,” Reeder says. “But its outcomes can be huge. Every advance in technology and healthcare can be traced back to fundamental research.” Over the years, Stony Brook researchers have had a tremendous impact on scientific developments in everything from astrophysics to medicine.

In 1963, chemist Paul Lauterbur came to Stony Brook to study whether information from nuclear magnetic resonance signals could be recovered in image form. His research ultimately lead to the development of the MRI, which doctors use to help diagnose hundreds of diseases and disorders. In 2003, Lauterbur won the Nobel Prize; his work was supported by 88 grants from the National Institutes of Health (NIH) during the course of 20 years.

“Stony Brook has been successful at attracting young scientists and engineers,” says Reeder, who is a former faculty researcher. “In part, that’s because of our longstanding commitment to research and our membership in the AAU.”

One of 62 distinguished research universities in the Association of American Universities (AAU), Stony Brook also offers access to an array of research facilities, including the U.S. Department of Energy’s Brookhaven National Laboratory (BNL). Stony Brook is part of the management team of BNL, and one of only eight universities with a role in running a national laboratory.

In announcing the prize’s establishment, Stony Brook President Samuel L. Stanley Jr., MD noted that basic research funding has shown a solid history of return on investment: “The only cure for cancer, the only solution to climate change, the only way to ensure the long-term survival of our planet and species lies in the promise of basic research.”

In keeping with President Stanley’s vision, Laurie Krug, an associate professor in the Department of Molecular Genetics and Microbiology and the Discovery Prize’s inaugural recipient in 2014, uses the $200,000 award to fund research into advancing understanding of the correlation between viruses and cancer. She says approximately 15% of human cancers are caused by viruses. “Our lab aims to understand how oncogenic herpesviruses infect an individual to increase [his or her] risk for cancer,” she says. Using gene-editing technology called CRISPR, Krug hopes to contribute to editing the genes that oncogenic herpesviruses use to hijack cells and, thereby, contribute to translational applications to treat and cure cancer.

Thomas Allison, an assistant professor with a joint appointment in the departments of Chemistry and Physics, uses his 2017 prize to observe how electrons move in molecules. Allison describes the “mini-movies” he hopes to make as similar in function to a microscope. “If we can record these movies, we can get a much better understanding of what’s happening at microscopic levels,” he says. “Once you have a tool, you can study a large number of things. Think of the impact of the microscope or other scientific instrument. This is similar to that.” Allison’s research could change the processes for developing solar cell materials for photocatalysts as well as how we generate energy.

The 2019 Discovery Prize winner, II Memming Park, an assistant professor in the Department of Neurobiology and Behavior, is using machine learning and neurotechnologies to understand how the brain works when trapped in unconscious states. He hopes his work will ultimately help scientists learn how to “wake up” patients in a coma state. Upon receiving prize, Park said, “I am looking forward to expanding collaborations on this research with colleagues in neurobiology, neurosurgery and other disciplines at Stony Brook University.”

Discovery Prize candidates go through a multi-stage selection process that begins with the submission of concept papers to a panel of Stony Brook scientists with expertise across disciplines. This panel narrows the pool of candidates down to 10; each candidate must then submit a lengthier proposal from which the Stony Brook scientists further reduces the number of candidates (from 10 to four this year). Those candidates are then coached by Stony Brook University’s Alan Alda Center for Communicating Science so that they may present their cases to a distinguished panel of Discovery Prize judges.

Future Discovery
Reeder says the Discovery Prize was conceived as a way for Stony Brook to bring attention to the importance of research that pushes the envelope and beyond. “The youngest and most innovative researchers face major barriers their first six to eight years,” Reeder says. “It’s high-risk research they’re doing but also high reward.”

“Our nation’s vitality and competitiveness depend on the many discoveries made at research universities,” added President Stanley following Park’s receipt of the most recent prize. “It is critical that we continue to support fundamental, curiosity-driven research and encourage our ambitious early-career faculty to pursue audacious ideas, which have the potential to transform lives and our understanding of the world around us.”

Patricia Wright, the founder of Centre ValBio, Distinguished Professor of Anthropology, and the Herrnstein Professor of Conservation Biology at Stony Brook University, will be awarded the Wildlife Conservation Award... 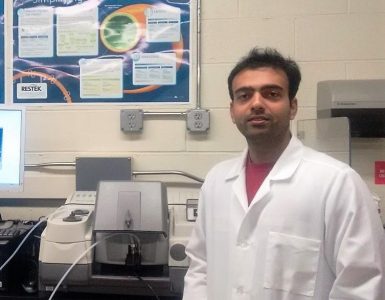