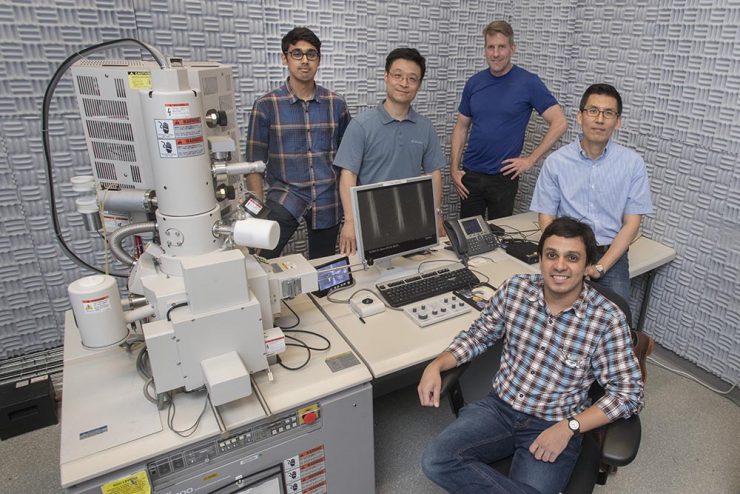 Findings that could facilitate the next generation of ultra-tiny electronics have been published by  Brookhaven Lab scientists, along with Ashwanth Subramanian, a PhD student in the Department of Materials Science and Chemical Engineering in Stony Brook’s College of Engineering and Applied Sciences.

A team at Brookhaven’s Center for Functional Nanomaterials have created “hybrid” organic-inorganic materials for transferring ultrasmall, high-aspect-ratio features into silicon for next-generation electronic devices, as outlined in a paper published by the Journal of Materials Chemistry C.

To increase the processing speed and reduce the power consumption of electronic devices, the microelectronics industry continues to push for smaller and smaller feature sizes. Transistors in today’s cell phones are typically 10 nanometers (nm) across—equivalent to about 50 silicon atoms wide—or smaller. Scaling transistors down below these dimensions with higher accuracy requires advanced materials for lithography—the primary technique for printing electrical circuit elements on silicon wafers to manufacture electronic chips. One challenge is developing robust “resists,” or materials that are used as templates for transferring circuit patterns into device-useful substrates such as silicon.

The research team used the recently developed technique of infiltration synthesis to create resists that combine the organic polymer poly(methyl methacrylate), or PMMA, with inorganic aluminum oxide. Owing to its low cost and high resolution, PMMA is the most widely used resist in electron-beam lithography (EBL), a kind of lithography in which electrons are used to create the pattern template. However, at the resist thicknesses that are necessary to generate the ultrasmall feature sizes, the patterns typically start to degrade when they are etched into silicon, failing to produce the required high aspect ratio (height to width).

These “hybrid” organic-inorganic resists exhibit a high lithographic contrast and enable the patterning of high-resolution silicon nanostructures with a high aspect ratio. By changing the amount of aluminum oxide (or a different inorganic element) infiltrated into PMMA, the scientists can tune these parameters for particular applications. For example, next-generation memory devices such as flash drives will be based on a three-dimensional stacking structure to increase memory density, so an extremely high aspect ratio is desirable; on the other hand, a very high resolution is the most important characteristic for future processor chips.