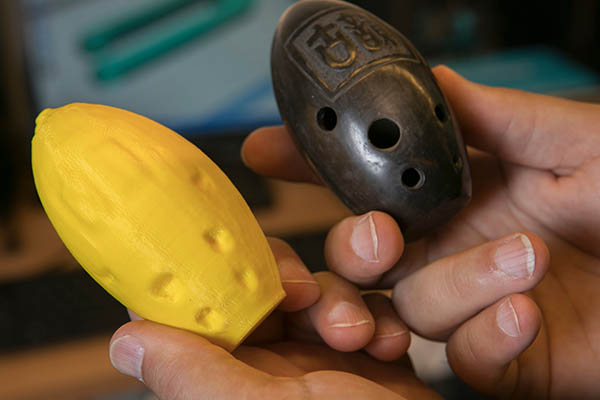 The goal? To give museum-goers an opportunity to interact with rare instruments rather than merely viewing them through a glass enclosure.

Loomis had been interested in wind instruments since he was a boy in Wisconsin, when he was struck deeply by flute music wafting from his car radio. After he moved to Long Island, his thirst for playing dovetailed with an insatiable curiosity about indigenous musical instruments. He hoped to build such instruments, as a way of sharing aspects of Native American culture with the public.

In his travels as an academic, he encountered musical virtuosos, acoustic experts and computer scientists who shared his passion. That passion gained momentum when Loomis became a teaching assistant at cDACT, the Stony Brook-based Consortium for Digital Art, Culture and Technology.

Through cDACT Director Margaret Schedel, Loomis connected first with Shilkrot and later Hideo Sekino, a visiting professor from Tokyo Institute of Technology, who is associated with the Institute for Advanced Computational Science at Stony Brook.

In spring 2017, Loomis and Shilkrot developed a 3D scanner and used desktop and professional 3D printers to recreate playable replicas of wind instruments, including flutes, ceramic ocarinas and whistles of different shapes and sizes. An integral part of the process was to recreate the sound of the original instrument and mirror its physical characteristics as well.

The greatest challenge the collaborators experienced was in designing the cavity of the instrument, which was essential to recreating the authentic sound.

The results were encouraging but weren’t as precise as Loomis wanted. Schedel recommended collaborating with Sekino due to his interest in the traditional Japanese flute known as a shakuhachi. After she introduced the two musicians, Loomis was inspired to feature the instrument in an electronic piece he co-composed with Timothy Vallier.

But it was Sekino’s expertise with 3D printing that led Loomis to seek professor’s advice on how to create a computer program to print ocarinas and other instruments.

Loomis was already able to approximate the sound by adjusting the distance between the holes on the ocarina. “I would fix some holes and print it again and, if I was lucky, it would be a three-step process of trial and error,” said Loomis.

“But I was using a lot of plastic. It would be much easier if I was making them out of clay,” he said. “I asked the professor why couldn’t we look at the size of the holes and create a computer model to simulate the sound of the instrument all on computer, creating a 3D model based on computer models.”

Sekino said it would be difficult. But three months later he sent Loomis a video of one his friends playing a 3D shakuhachi. Sekino had shot an X-ray of the original instrument and translated that image using software data.

Now Sekino is on board with using 3D printing to create instruments that might otherwise be too labor-intensive to construct.

“His interests are twofold — as a scholar and as a performer,” said Loomis.

“The project lends itself to creating a bridge among science, music and engineering and the public,” Loomis said.

Loomis added that there is a need to educate the public about indigenous musical instruments, which he does in schools, libraries, camps and for the past five years at Stony Brook University’s Children’s Defense Fund Freedom School.

“At the moment, the only musical instruments for sale in museums are generally children’s toys,” Loomis said.

For the moment, however both Loomis and Sekino are quite content to be fully engaged in the theory of building that better wind instrument and the big payoff — playing it in public. 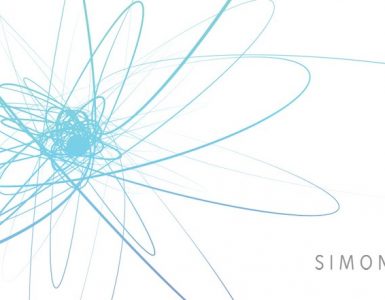 Xiuxiong Chen, Professor of Mathematics, and Rouven Essig, Associate Professor of Physics at Stony Brook University, have been named 2019 Simons Investigators, becoming the first faculty members at the University to...

Joanna Kiryluk, PhD and Sandeep Mallipattu, MD have been named recipients of the Presidential Early Career Award for Scientists and Engineers (PECASE) — the highest honor bestowed by the US government to outstanding... 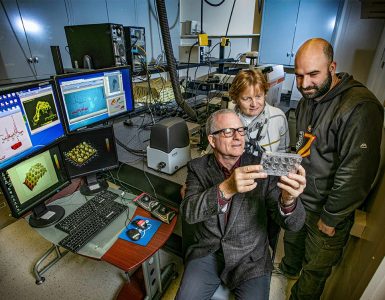 It’s an invisible problem on a global scale. Drinking straws, shopping bags and other plastic litter contaminating our beaches and oceans are easy to see, but true microplastics – particles ranging in size from 5...