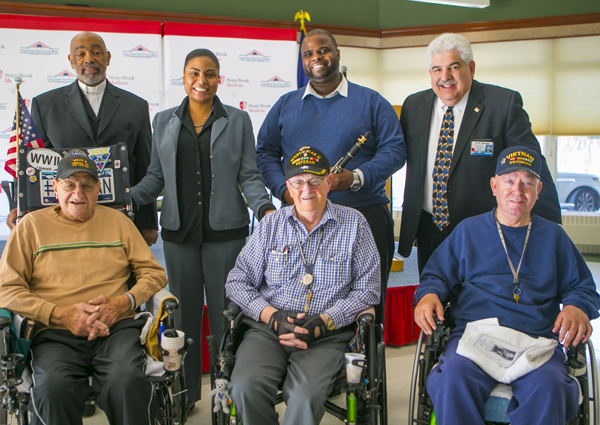 The Long Island State Veterans Home (LISVH) held its annual remembrance ceremony in honor of Dr. Martin Luther King Jr., on Friday, January 16, with nearly 150 veterans, staff and guests in attendance. The event focused on celebrating Dr. King’s life and thanking the veterans for their service to our country.

“We’re so proud to host this remembrance service, particularly with veterans who fought for the same rights for freedom and equality as Dr. King,” said LISVH Executive Director Fred Sganga.

Dr. King’s legacy of his work to strengthen communities, empower individuals and bridge barriers inspires Americans to think beyond themselves, look past differences and work toward equality. Keynote speaker Councilwoman Valerie Cartright shared with the group that it is important for our future that we reflect on how we can each serve and that we ask ourselves if we can do more to effect change.

“The spirit and memory of Dr. King lives in those who continue to fight for the principles of our country, those that sacrificed for the freedom of our citizens,” Cartright said. “I cannot think of a better way to celebrate the life and the legacy of Dr. King than with Long Island’s veterans who truly epitomize the meaning of honor and service for our country.”

The program included an invocation and several lively songs performed a cappella by LISVH Protestant Chaplain Reverend Gregory Leonard, and a benediction by LISVH Catholic Chaplain Father Peter O’Rourke, who quoted from Abraham Lincoln’s Gettysburg Address that “all men are created equal.”