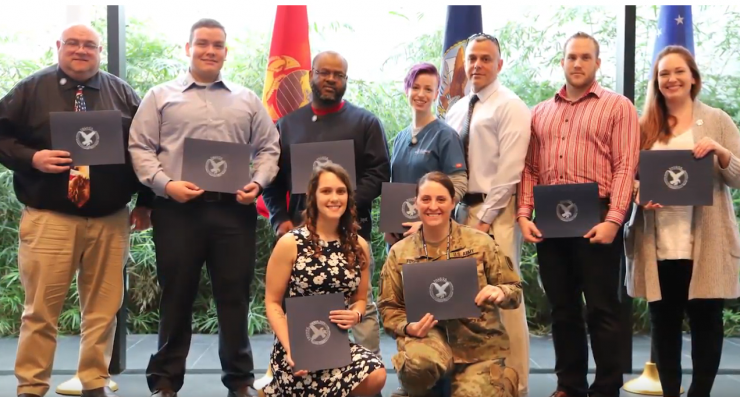 The Office of Veterans Affairs hosted an induction ceremony for SALUTE, the first national academic honor society established for student veterans. SALUTE is an acronym that stands for Service, Academics, Leadership, Unity, Tribute and Excellence, which are the foundation blocks and core values of this honor society.

Fifteen Stony Brook veteran students were inducted. Although SALUTE was created in 2009, this is the first cohort of Stony Brook students inducted to this honor society.

Jane York, President of the honor society and Graduate Student Advocate, led the ceremony with a speech that reiterated the veterans’ work ethic and desire to excel. “It’s natural for me that we should have an honor society for veterans,” York said. “Veterans get the job done.”

Stony Brook University joins the ranks of more than 200 chapters of SALUTE throughout the United States in recognizing the accomplishments made by student veterans. To do this, inductees were required to clearly demonstrate the SALUTE ideals of Service, Academics, Leadership, Unity, Tribute and Excellence.

PhD student Huy Vu has found a creative way to explain his thesis — by writing, directing, producing and dancing in a video. The third-year PhD candidate in the Department of Computer Science at Stony Brook University...