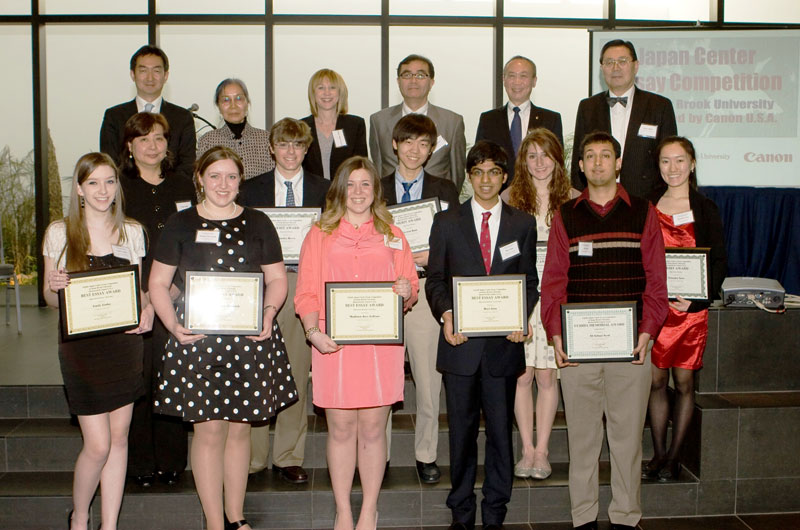 Melisa Rose Kavanah, a Stony Brook senior majoring in English, won the Best Essay Award in the College Division of the Japan Center’s Eighth Annual Essay Competition, with her essay entitled “Understanding Impermanence.” Another  Stony Brook student, Ali Gilani Syed, won the Uchida Memorial Award for his essay, “ Wabi-Sabi: Nothing is Perfect, Even Gardens Have Weeds.” Syed is a junior majoring in biochemistry.

In these winning essays, both authors shared an unbearable experience: the death of a friend for Kavanah, and the passing of a beloved grandmother for Gilani. The harsh experience of the loss of a loved one inspired the authors to change the manner in which they perceived their lives. In both instances, the authors’ perceptions were altered by being introduced to new philosophies, Zen Buddhism in the first essay and Wabi-Sabi in the second. After true reflection, self-realization was achieved by recognizing that what both authors had previously misperceived as impermanence and imperfection was, in fact, a manifestation of true beauty. Finally, both winning authors emphasized the importance accepting change and being receptive to other cultures and philosophies.

The Japan Center’s Essay Competition is co-sponsored by Canon USA. Kavanah and Gilani were presented with an Award Certificate of $3,000 and $1,000, respectively, and a Canon camera each at the Award Ceremony held on April 6 at the Charles B. Wang Center.

The goal of the Essay Competition is to promote awareness and understanding of Japan in the United States and to help young Americans broaden their international horizons. This year the contestants were required to write about one or more aspects of Japan in relation to their personal view, experiences and/or future goals.

A total of 199 essays were received and carefully evaluated in two stages by a panel of judges composed of Stony Brook faculty members. The winner in the High School Division was Madison Jaye LoFaso from Huntington High School.

To view all the winning essays and detailed information on other Japan Center programs, visit the JCSB website.