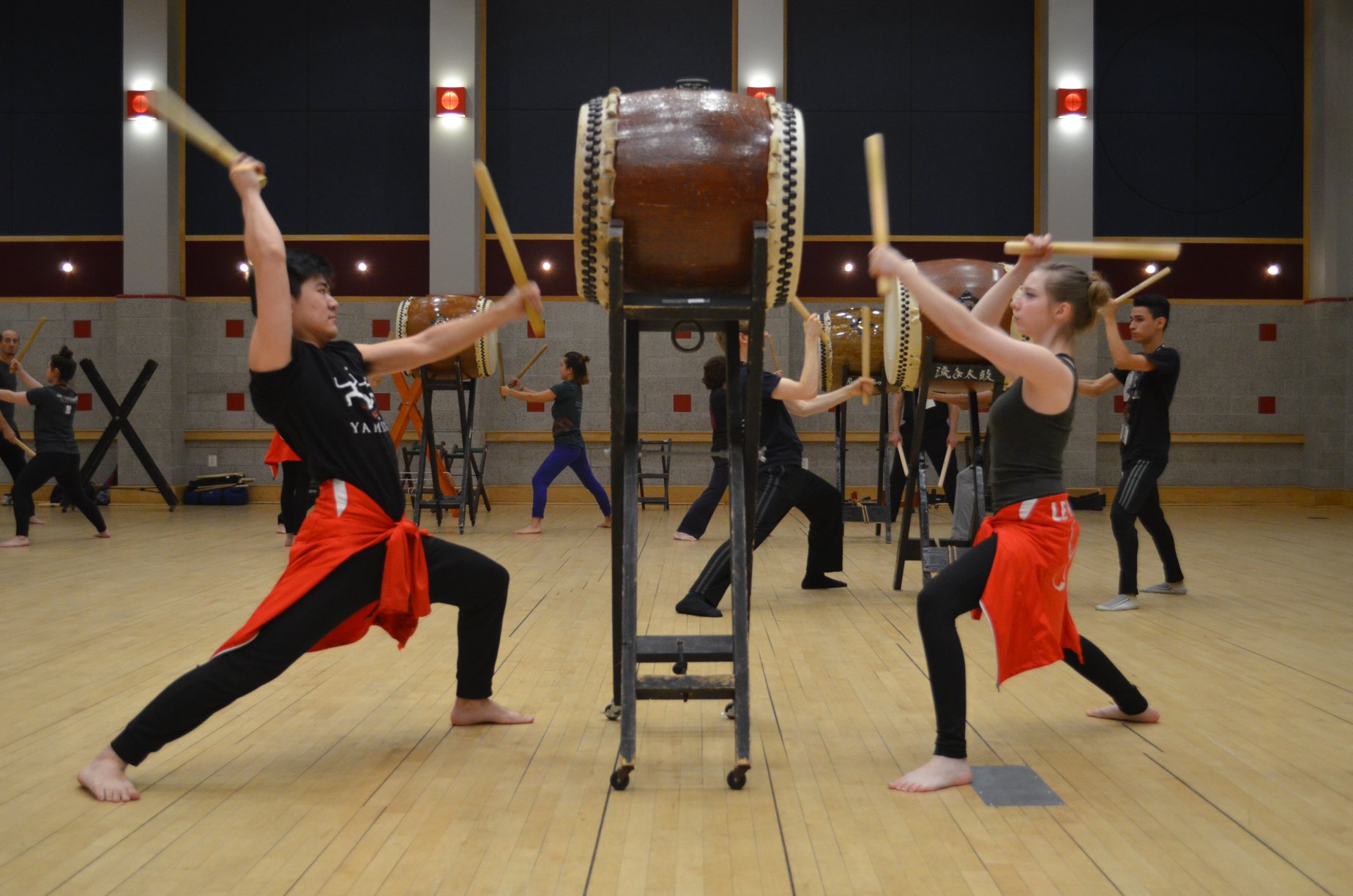 Student group Taiko Tides welcomed drum groups from across the country as Stony Brook University hosted the 2018 East Coast Taiko Conference (ECTC), February 9 through February 11. This marked not only the first year that Stony Brook hosted the conference, which started in 2011 at Cornell University, but also the first time ECTC was hosted by a public university.

“I love performing for people, and while the practicing is very long and intense, at concert time I just light up and I love seeing the people’s faces,” said Vice President of Taiko Tides Grace Zhen, a Stony Brook senior in charge of facility booking, fundraising and facilitator for the conference.

While she is still a beginner, Zhen was first drawn to Taiko as the broad range of percussion instruments are similar to her native Chinese drums. After seeing the group perform at a Japanese Student Organization event, she decided it was time to join. “I took a class with the faculty advisor of Taiko Tides, Professor Eva Nagase from the Asian and Asian American Department in the College of Arts and Sciences, and I also went with her to a Study Abroad program in Mishima, Japan, after which I joined Taiko,” said the Information Systems major.

Taiko Tides was founded in 2001 by Joan Miyazaki, a biology professor from Stony Brook University. She gathered students and staff from all corners of the demographic and academic spectrum to pay homage to Japanese culture. Originally a small cohort of amateurs, Taiko Tides has developed into a performance group endorsed by the Department of Asian and Asian American Studies. With more than 20 members today, Taiko Tides has gained a diverse set of individuals, and despite their differences, they embrace the uniqueness of one another and utilize the organization to foster a sense of community.

“We welcome all types of students from any kind of background. I myself had no prior experience,” said Zhen. “I joined with a whole group of first-year students from the involvement fair during my junior year. Even though some of us had no musical background prior to joining, they took their time to teach us and we all help each other out to make the whole group that much better.”

Historical accounts, of which the earliest date from 588 CE, note that young Japanese men traveled to Korea to study the kakko, a drum that originated in South China. In feudal Japan, Taiko were often used to motivate troops, call out orders or announcements, and set a marching pace; specific drum calls were used to communicate orders for retreating and advancing. In addition to the instruments, the term taiko also refers to the performance itself, and commonly to one style called kumi-daiko, or ensemble-style playing, and has been incorporated in Japanese theatre. 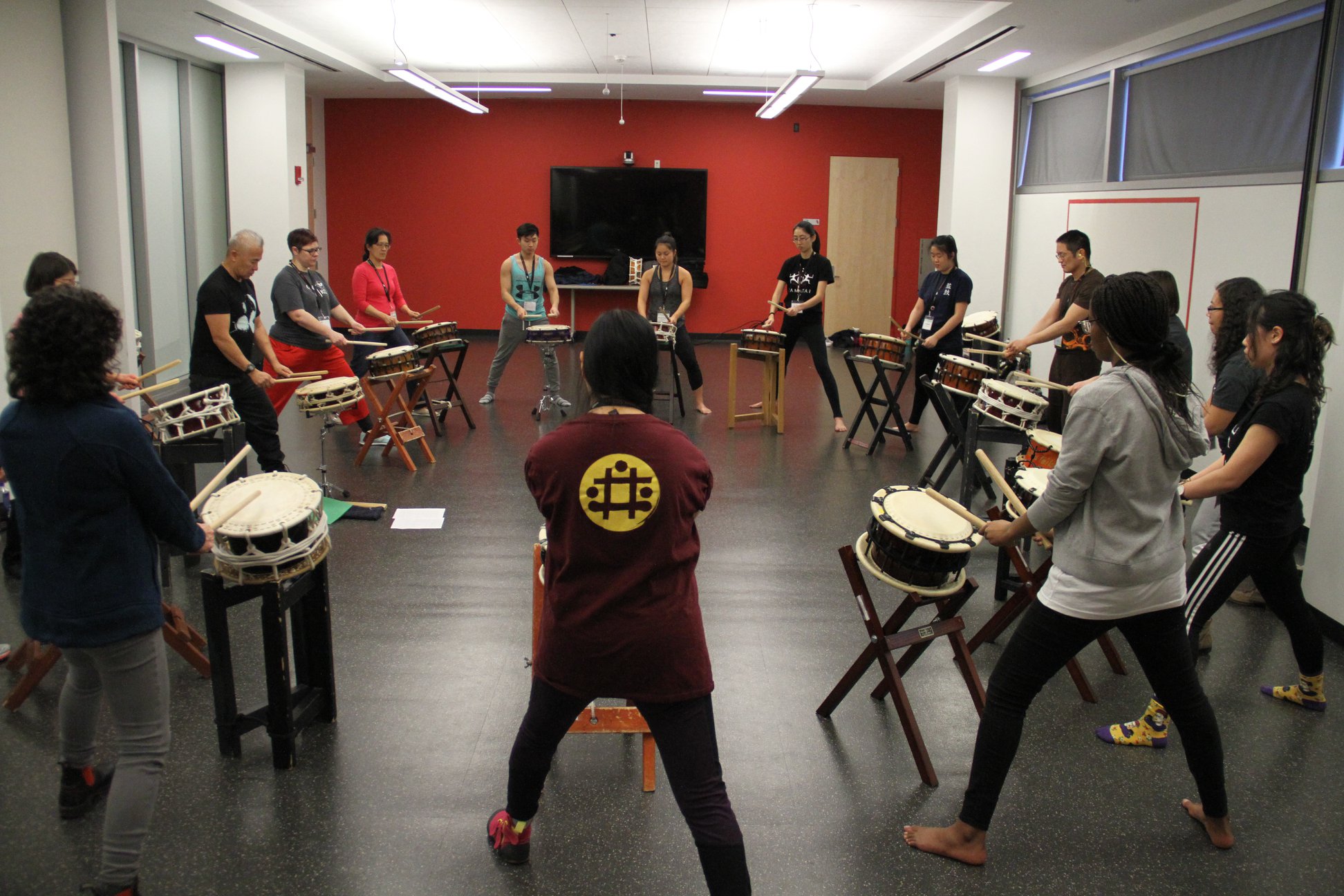 The ECTC featured a number of workshops led by world-renowned Taiko players, providing a space where all members of the Taiko community could come together and learn a variety of traditional dance and drumming techniques from different groups, regardless of age, background or skill level. The highlight of the festivities for many was the concert held on Saturday evening, which offered free admission for SBU students.

“Taiko Tides is a welcoming group where students can find a place to belong. Sometimes being a college student can be really tough,” said Eva Nagase, Asian and Asian American Studies lecturer, program director for the Japan summer Study Abroad program and faculty advisor to Taiko Tides. “Japanese drums have the special ability to bring people together. Through the power of the drums, training hard together, and learning the art form, the members of the group form friendships and a sense of community.”

This video features “Se-do,” composed by Sang Yeon Pak, SBU alum and former Taiko Tides president, and arranged by Helena Ge. Inspired by the beats of “Chichibu Yatai Bayashi” and the compositions of Hans Zimmer, Se-do means “stillness and movement,” which creates a dynamic and powerful composition that balances tradition with modernism.