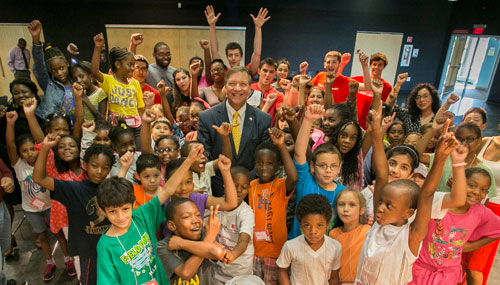 Stony Brook University President Samuel L. Stanley Jr., MD, paid a visit to the Tabler Center for Arts, Culture and Humanities on July 17, where Freedom School is back in session. The six-week summer literacy and enrichment program, now in its second year at the University, is designed to boost motivation to read, generate positive attitudes toward learning and higher education, and raise the self-esteem of  the participating elementary schoolchildren.

Freedom Schools is a Children’s Defense Fund (CDF) national program established in 1992 under the leadership of CDF President and children’s advocate Marian Wright Edelman. Freedom Schools provide rigorous, quality summer and after-school instruction to children from low-income families. The curriculum is based on the belief that all children are capable of learning and achieving high standards.

Following the success of the last summer’s pilot program, in which the University hosted 50 mostly low-income third-grade students from the Longwood and Wyandanch school districts, President Stanley, a strong advocate of the Freedom Schools, committed to four more years of funding for the program. The same cohort of students — now fourth-graders — were invited back to this year’s program, which is free to participants and their families and includes two nutritious meals.