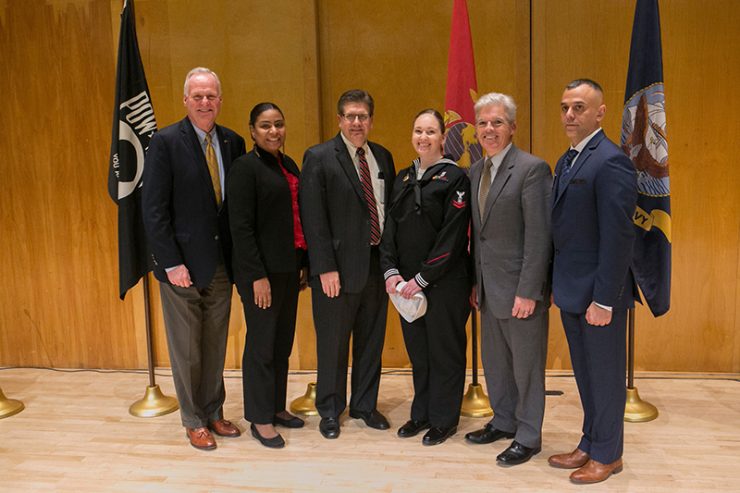 The brave, selfless veterans who served the United States were honored on Wednesday, November 7, at a crowded annual Veterans Day ceremony in the Student Activities Center. This year was special as the event also commemorated the 100th anniversary of World War I with a photo gallery after the ceremony so that guests could explore.

The spirit of the Stony Brook Marching Band lifted the ceremony, beginning with a special set of songs for every division of the military. Alex Safran ‘18, Vice President of the Veteran Students Organization and U.S. Army Veteran, delivered the opening speech to the ceremony.

“It’s our responsibility to give back to courageous individuals,” Safran said.

Bellone added to the importance of giving back to veterans. “Our nation is the beacon for the world,” he said. “They look up to us for security, for order and for democracy. These are possible because of the individuals who stand up and serve their country.”

This year’s student speaker, Petty Officer 2nd Class US Navy Jane York ‘19, also Graduate Student Advocate, was the first Stony Brook female veteran speaker to take part in the Veterans Day Ceremony. Jane’s story touched many as she expressed her passion for her job in the past and touched upon the sacrifices veterans continue to do. “I had a hand behind, urging me and helping me move forward toward any goal I wanted to achieve. I later wanted to become that hand for others.” She took care of her marines unconditionally and let them know that she cared for them. At one point, she had set up a chair in her office, where they were allowed to just come in and talk. “They had started to call me ‘Momma York.’ This was my first form of social work, yet I didn’t know it at the time.” Since she left the Navy, York’s interest in social work has grown. She hopes to create more programs to support veterans.

Carmelo Batista ‘19, a Journalism major, said “Jane York was amazing. Just listening to her story and how dedicated she was to her job was amazing. And hearing her journey to deciding to become a social worker just to help out more people, you can tell how selfless she is and how much all of the veterans mean to her. The ceremony all together was great, and I hope to attend every year.”

Keynote speaker and U.S. Marine Corps Veteran Joseph Campolo ‘94 emphasized the importance of a support system after the benefits that he experienced. “They give their all whenever anything tries to imperil our freedom and democracy. We must all ensure that our obligations to them do not end when November 11 becomes November 12,” Campolo said.
Starting in the Army at a very young age, Campolo explained the importance of the U.S. Military as they make sure that the balance of world power remains in check. “It is essential to maintaining world peace. Our veterans serve and continue to serve.” Campolo attended Stony Brook University through the GI Bill and stated the significance of it as it is a “golden ticket to world class education.” It was a gateway to a brand new world. “Each veteran has had their own unique experience,” he said. “Support them in every single way. Today’s ceremony will be meaningless if afterwards we do not provide and help support them with jobs and opportunities.”

“The ceremony moved me as the speakers shared their experiences. It made me appreciate and really understand what conditions they work under and the pressure and sacrifices that veterans had to make, “ said Ray Feng ‘20, a student working at the Student Affairs Office.