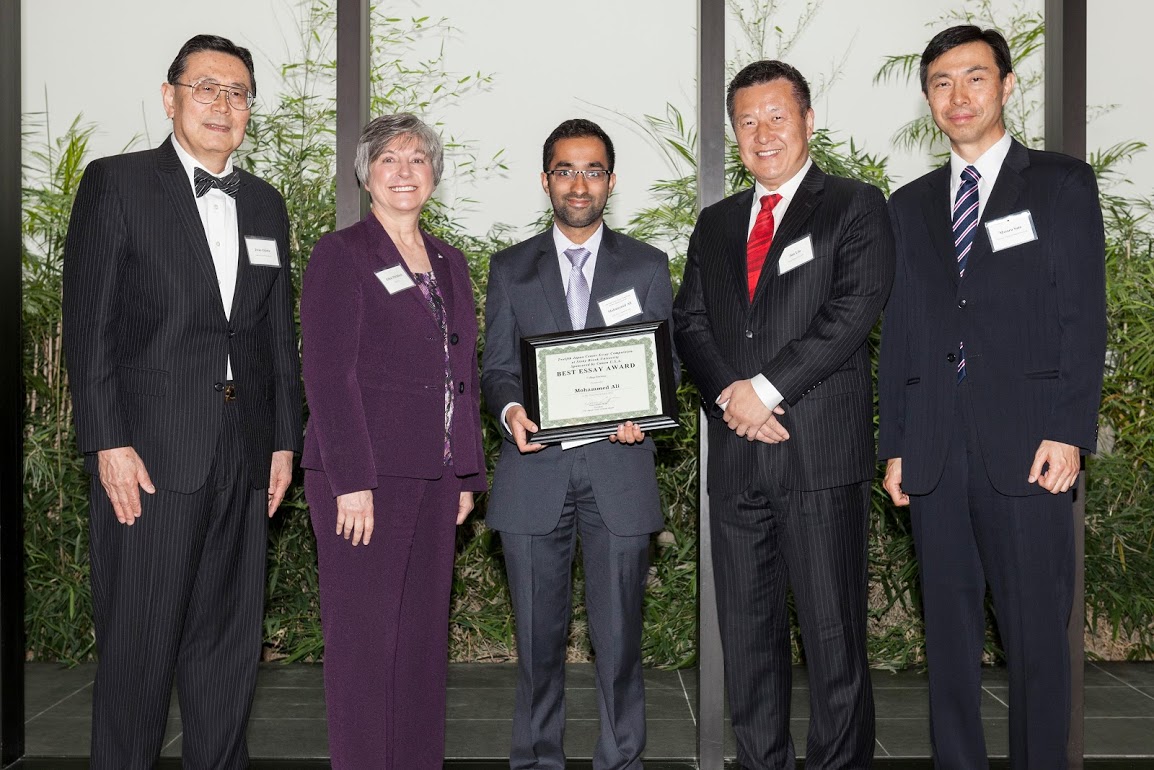 Stony Brook Sophomore Mohammed Ali, majoring in Multidisciplinary Studies with concentrations in Philosophy and Religious Studies, received the Best Essay Award in the College Division of the Japan Center at Stony Brook University’s (JCSB) 12th Annual Essay Competition sponsored by Canon USA. He was presented with an award certificate, a $3,000 check and a Canon camera at the Award Ceremony held on Saturday, April 22, at the Charles B. Wang Center.

Mohammed’s award-winning essay, “Wrong,” is a perceptive reflection of his comprehension of Japanese Buddhism and its answer to the universal question posed to him by his sensei: “What does it mean to be human?” He was taught by her that there is both a Japanese and a Buddhist answer to this question. He learned that “people were too involved in their selfish egos to answer such a universal question.” His sensei stressed that the Japanese Buddhist culture teaches that transcending one’s ego as well as believing one’s own capacity for evil are the only ways to accrue the universal compassion required to answer this question. The author opines that he ultimately achieves self-enlightenment by admitting that he had been wrong to ridicule another of his sensei’s students for not understanding this answer.

Inspired after taking a class in Japanese Buddhism, Mohammed was fascinated by the respect for religion and culture that the class taught. It allowed him to appreciate religion on its own terms instead of constantly comparing it to the West, and he saw what answers that particular tradition gave to the great questions of life. The experience of taking Japanese Buddhism gave him an insight into the very abstract philosophical underpinnings of traditional Japanese society. He wrote this essay to express that understanding. Mohammed is aspiring to get into a PhD program in Religious Studies and Philosophy after completing his undergraduate program.

The goal of the Japan Center’s Essay Competition is to promote awareness and understanding of Japan in the United States and to help young Americans broaden their international horizons. This year the contestants were required to write about one or more aspects of Japan including art, culture, tradition, values, experiences, and or future goals. The contestants did not need to have any experience in visiting Japan or studying Japanese.

A total of 220 essays, 203 in the High School Division and 17 in the College Division, were received for the essay competition this year. These essays were carefully evaluated in two stages according to JCSB’s rubric by a panel of judges made up of Stony Brook faculty members.

To view all the award-winning essays and detailed information on the essay competition, as well as other Japan Center programs, visit the JCSB website.