Smiley and West to Speak About Poverty April 26 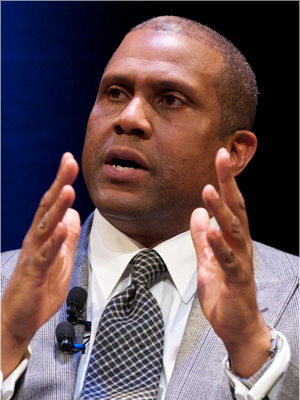 Award-winning broadcaster Tavis Smiley and Cornel West, one of the nation’s leading intellectuals, are coming to Stony Brook University on Thursday, April 26, at 5 pm at the Staller Center for the Arts Main Stage. In their lecture, “The Rich and the Rest of Us: A Poverty Manifesto,” they will challenge all Americans to re-examine their assumptions about poverty in America — what it really is and how to eradicate it.

The lecture is free and open to the public. Copies of their jointly authored new book, The Rich and the Rest of Us: A Poverty Manifesto, will be available for signing after the lecture.

Record unemployment and rampant corporate avarice, empty houses but homeless families, dwindling opportunities in an increasingly paralyzed nation—these are the realities of 21st-century America, land of the free and home of the new middle class poor. Award-winning broadcaster Tavis Smiley and Dr. Cornel West, one of the nation’s leading democratic intellectuals, co-hosts of Public Radio’s Smiley & West, now take on the “P” word—poverty.

The Rich and the Rest of Us is the next step in the journey that began with “The Poverty Tour: A Call to Conscience.” Smiley and West’s 18-city bus tour gave voice to the plight of impoverished Americans of all races, colors, and creeds. With 150 million Americans persistently poor or near poor, the highest numbers in over five decades, Smiley and West argue that now is the time to confront the underlying conditions of systemic poverty in America before it’s too late.

By placing the eradication of poverty in the context of the nation’s greatest moments of social transformation — the abolition of slavery, woman’s suffrage, and the labor and civil rights movements — ending poverty is sure to emerge as the defining civil rights struggle of America’s 21st century.

From his celebrated conversations with world figures to his work to inspire the next generation of leaders as a broadcaster, author, advocate, and philanthropist, Tavis Smiley continues to be an outstanding voice for change. Currently, Smiley hosts the late-night television talk show Tavis Smiley on PBS; The Tavis Smiley Show, distributed by Public Radio International (PRI); and is a co-host of Smiley & West (PRI). He is the first American to simultaneously host signature talk shows on both public television and public radio. In addition to his radio and television work, Smiley has authored 16 books, including his New York Times bestselling memoir What I Know for Sure and the book he edited, the #1 New York Times bestseller, Covenant with Black America. He is also the presenter and creative force behind America I AM: The African American Imprint—an unprecedented and award-winning traveling museum exhibition celebrating the extraordinary impact of African American contributions to our nation and to the world. In 2009, Smiley was named one of TIME’s “100 Most Influential People in the World.”

Educator and philosopher Cornel West is the Class of 1943 University Professor at Princeton University. Known as one of America’s most gifted, provocative, and important democratic intellectuals, he is the author of the contemporary classic Race Matters, which changed the course of America’s dialogue on race and justice; the New York Times bestseller Democracy Matters; and the memoir Brother West: Living and Loving Out Loud. He is the author of 17 other texts and the recipient of the American Book Award. West holds more than 20 honorary degrees, and will return this fall as Professor of Philosophy and Christian Practice at Union Theological Seminary in New York City.

More information about The Rich and the Rest of Us