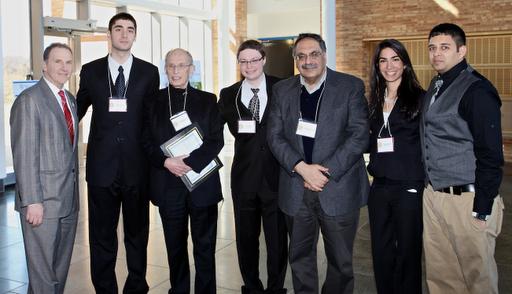 The Undergraduate Student Government (USG) at Stony Brook recently hosted the 2011 Sigma Xi Northeastern Research Symposium at the Center of Excellence in Wireless and Information and Technology to showcase the work of top undergraduate, graduate, and doctoral students from across the country in various fields of science. Organized by a team of undergraduate researchers led by Yan Leyfman, with guidance from the Office of the Vice President for Research and the Office of the Dean of Students, this Stony Brook event was an unmitigated success by all accounts.

Sponsored by the USG in collaboration with NYSTAR-Designated Center for Advanced Technology, Office of the Dean of Students, and the Office of the Vice President for Research, the Sigma Xi research symposium is regarded as one of the most prestigious student research conferences in the Northeast and the nation. Held in celebration of National Undergraduate Research Week, this year’s symposium was one of the largest and most decorated in Sigma Xi history.

In a letter to the organizing committee, Sigma Xi President Michael P. Crosby, Senior Vice President for Research at Mote Marine Laboratory, praised the success of the Stony Brook event, saying that it has become a model example of Sigma Xi’s outstanding regional capacity to provide unique opportunities for student engagement with leaders in the global research community.

“I know that successful events like this take a team, and I want to extend my sincere appreciation to all who worked to make it happen,” said Baker. “The Northeast region is a wonderful example of what other regions can do as well.”

Kestutis Bendinskas, Northeast Associate Director and Conference Coordinator, who is an Associate Professor of Chemistry at SUNY-Oswego, felt the event was an overwhelming success. He was very impressed that the entire effort and organization was student driven, with Leyfman leading the effort, and that the “support provided by Stony Brook officials to this group of young science professionals was exemplary.”

“We revamped this year’s conference to better showcase the exceptional research work from the nation’s top undergraduate, graduate, and doctoral students,” said Leyfman. “This event also provided aspiring student scientists the opportunity to network with leading scientists of today, with each other, with faculty, and with members of the Stony Brook community.”