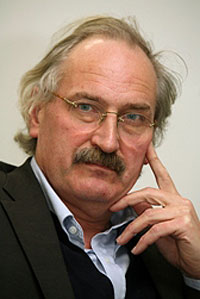 The Normativity of Ethical Life

Axel Honneth is the Jack C. Weinstein Professor for the Humanities in the Department of Philosophy at Columbia University; Director of the Institute for Social Research, Goethe-Universität Frankfurt am Main; and C4-Professor of Social Philosophy, Goethe-Universität Frankfurt am Main. Honneth’s work focuses on social-political and moral philosophy, especially relations of power, recognition and respect. One of his core arguments is for the priority of intersubjective relationships of recognition in understanding social relations. This includes non- and mis-recognition as a basis of social and interpersonal conflict. For instance, grievances regarding the distribution of goods in society are ultimately struggles for recognition.

He is the author of The I in the We (2013), Das Recht der Freiheit (2011), The Pathologies of Individual Freedom: Hegel`s Social Theory, (2010), Pathologies of Reason: On the Legacy of Critical Theory (Columbia University Press, 2009), Reification: A New Look at an Old Idea, (2008), Disrespect: The Normative Foundations of Critical Theory (2007), Redistribution or Recognition?: A Political–Philosophical Exchange, co-authored with Nancy Fraser ( 2003), The Struggle for Recognition: The Moral Grammar of Social Conflicts (1996).

Abstract: This lecture will show that Hegel’s concept of “ethical life” entails some immanent criteria that allow him to distinguish within the horizon of a given form of life, between valid norms and merely accepted ones: by first identifying those general criteria that Hegel sets out as immanent givens of any justifiable form of ethical life and then examining whether this provides clues for discerning a certain directionality of moral development within history.

This Provost’s Lecture, co-sponsored by the Department of Philosophy, will be held on Friday, September 20, at 4 pm, in Harriman Hall 214.