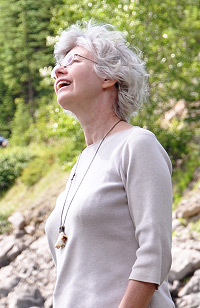 A Superposition of Brains
Alice Major is a distinguished poet in Western Canada who has published nine award-winning and highly praised collections of poetry. She also has a life-long interest in science, triggered when she was given a book on the theory of relativity at the impressionable age of 10. Her most recent book is a collection of essays, Intersecting Sets: A Poet Looks at Science. The book has received high praise in publications such as American Scientist and has received several awards, including a National Magazine Award for one of its essays, “The Ultraviolet Catastrophe.”

Abstract: Popular stereotypes (which hardened throughout the last century) assume there are profound differences in the ways artists and scientists think. But poets and math majors both use the same basic brain set-up that has been evolving for billions of years, and share the same equipment for processing data from the world and creating meaning out of it. Human cognition can be thought of as a superposition of states, in which “artistic” and “scientific” are hopelessly entangled. Can we identify the differences?

This Provost’s Lecture, co-sponsored by the CN Yang Institute for Theoretical Physics and the Humanities Institute, will be held on Tuesday, September 17, at 4:30 pm in Humanities 1006. A reception will follow the lecture.