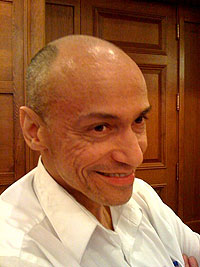 Charles W. Mills is John Evans Professor of Moral and Intellectual Philosophy at Northwestern University. He works in the general area of social and political philosophy, particularly in oppositional political theory as centered on class, gender and race. In recent years he has been focusing on race. He did his PhD at the University of Toronto and is the author of numerous articles, book chapters and five books. Before joining Northwestern, Mills taught at the University of Oklahoma and the University of Illinois at Chicago, where he was a UIC Distinguished Professor.

His first book, The Racial Contract (Cornell University, 1997), won a Myers Outstanding Book Award for the study of bigotry and human rights in North America. It has been adopted widely in courses across the United States (more than 100 campuses so far), not just in philosophy, but also political science, sociology, anthropology, African-American and race relations. His second book, Blackness Visible: Essays on Philosophy and Race (Cornell University, 1998), was a finalist for the award for the most important North American work in social philosophy of that year. His fourth book, Contract and Domination (Polity Press, 2007), is co-authored with Carole Pateman, who wrote The Sexual Contract (Stanford University Press, 1988), and it seeks to bring the two “contracts” together. His most recent book is a collection of his Caribbean essays, Radical Theory, Caribbean Reality: Race, Class and Social Domination (University of the West Indies Press, 2010).

Abstract: A striking feature of the vast literature on social justice produced during the past few decades is the marginality of racial justice as a central theme. Though Western political philosophy (which basically means liberalism) has undergone a spectacular revival since the mid-20th-century pronouncements of its imminent demise, race has been ghettoized as a legitimate topic. Yet the Western world of settler states and colonies, of domestic and external colonialism, was centrally structured by race. This lecture will offer some suggestions as to how a liberalism that has been shaped by this history might need to be rethought to deal adequately with race.

This Provost’s Lecture, co-sponsored by the Department of Philosophy, will be held on Thursday, September 13, at 5 pm in the Simons Center for Geometry and Physics Auditorium, Room 103.

Community Service Day is Saturday, August 21, and will feature more than 600 volunteers from Stony Brook University taking part in a variety of service projects that are important to both the campus and the community...

Seawolves can get in the Halloween spirit and enjoy fun activities right on campus. Check out this list to find out how to get spooky! Social distancing guidelines and health and safety requirements will be enforced at...

Employers across the country shared best practices around diversity and inclusion issues in university recruitment during the heightened state of racial injustice.