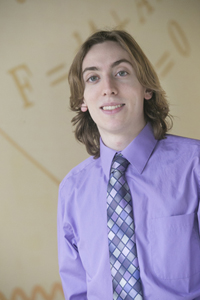 Kevin Sackel, an Honors College student double-majoring in mathematics and physics with a minor in music, has been selected as a Churchill Scholar by the Winston Churchill Foundation of the United States to study at the University of Cambridge where he will spend the 2013-2014 academic year pursuing a one-year Master of Advanced Study degree in mathematics.

This prestigious award is given each year to select students that demonstrate exceptional academic talent, outstanding achievement and a capacity to contribute to the advancement of academic knowledge in their respective field. Of this year’s 14 Churchill Scholarship recipients, Sackel is the only student selected from a New York college or university. He will receive full tuition and college fees, a living allowance and a stipend for travel expenses.

“We are all extremely proud of Kevin for achieving such a high honor, and as such, he honors Stony Brook,” said Stony Brook University President Samuel L. Stanley Jr., MD. “We have celebrated three Stony Brook educated Churchill Scholars in recent years, all of whom are brilliant. Kevin is the first to be awarded this prestigious scholarship in the tremendously competitive Cambridge Department of Pure Mathematics. That he has accomplished this underlines his prowess as well as that of our Math Department. I could not be more impressed.”

“Through hard work and dedication, Kevin Sackel has clearly earned what is one of the most competitive and prestigious academic opportunities in the nation,” said SUNY Chancellor Nancy L. Zimpher. “As a Churchill Scholar, we are confident that he will represent New York and SUNY with distinction as he continues his studies alongside some of the world’s best and brightest young minds. Congratulations to Kevin and the entire Stony Brook community.”

“I am extremely honored to have been selected as a Churchill Scholar,” Sackel said. “My experience at Stony Brook University has been wonderful and I thank all of those who have supported me throughout my academic career and during the application process for this award. I am really looking forward to my experience in the Department of Pure Mathematics at Cambridge; I think it will be great fun.”

Under the direction of Stony Brook Math Professor Christopher Bishop, himself a Churchill Scholar (1982-1983), Sackel is working on his undergraduate thesis involving questions of mathematical analysis. Bishop fully supported Sackel’s application and noted that he “is the best candidate for a Churchill Scholarship I have ever seen, or expect to see.” Sackel has maintained a perfect 4.0 grade point average.

Sackel also conducted independent research involving algebraic structures under the direction of Professor Martin Rocek of the C.N. Yang Institute for Theoretical Physics. Additional faculty sponsors supporting Kevin’s application include Professors Moira Chas and Dennis Sullivan in the Department of Mathematics. Chas praises Sackel’s “fantastic mind” and ranks him as “the best student I have met in my more than 20 years of teaching.” Sullivan, winner of the Wolf Prize in Mathematics (2010), in detail relates his astonishment at Sackel’s problem-solving abilities and describes his unique personal qualities as very rare.

“I am deeply impressed by Kevin’s intelligence, commitment, humility and concern for others,” said Charles Robbins, Vice Provost for Undergraduate Education at Stony Brook. “While it is unusual to meet a student with any one of these characteristics, to encounter someone who demonstrates them all on virtually a daily basis is indeed very special. Kevin is that special individual. There is no doubt in my mind that he will make the Churchill Scholarship program, Cambridge University and Stony Brook University very proud.”

In his freshman year at Stony Brook, Sackel reinvigorated the Math Club and now serves as its president. For the past four years he has represented the Department of Mathematics in the William Lowell Putnam Mathematics Competition, an annual event for undergraduate students that is considered by many to be the most prestigious university-level mathematics examination in the world. He was inducted into the Phi Beta Kappa and Sigma Pi Sigma Honors Societies as a junior and plays the oboe for the University Orchestra. He is a recipient of the Undergraduate Recognition Award for Academic Excellence and is a member of the computer programming team.

Other honors include winning the Freshman Math Department Award, the Stony Brook Foundation Award for Excellence in Mathematics as a sophomore, and the Kugh-Sah Memorial Award in Mathematics as a junior. He regularly challenges himself with graduate-level courses and in his spare time audits courses that spark his interest. He also dishes out compliments and hugs to people in front of the Student Activities Center every Monday to brighten their day.

After finishing his PhD in mathematics, Sackel hopes to enter the academic world. “Professorship appears to be the ideal job, since it would keep me strongly tied to the mathematical world through research while also allowing me to share my love of mathematics through teaching.”