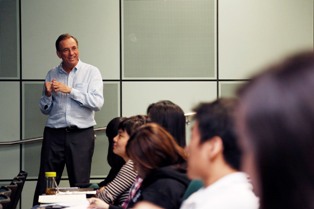 Students at Hong Kong University are now learning how to judge the reliability of news and information courtesy of Stony Brook University’s School of Journalism and a groundbreaking course in news literacy.

The landmark partnership with Hong Kong University’s Journalism and Media Studies Centre — part of an initiative to teach news consumers in China and other areas of Asia how to distinguish the reliability of news and information they read, watch or hear — is being funded by an anonymous, three-year, $500,000 grant to the Stony Brook University School of Journalism, intended to bring news literacy curriculum overseas, particularly to areas of the world that have not traditionally supported news transparency or a free press. The initiative with Hong Kong University is the first program to be funded under this grant.

This pioneering partnership will also include curriculum development and training for professors from Mainland China and throughout Asia, several of who will have the opportunity to spend a follow-up semester focused on news literacy at Stony Brook. This project was spearheaded by Howard Schneider, dean of the School of Journalism at Stony Brook University and former editor of Newsday, and Ying Chan, dean of the School of Journalism and Media Centre at Hong Kong University. Chan is a Hong Kong native and a former reporter at the New York Daily News.

“This is a major challenge,” said Schneider. “Can we take a course we are teaching to thousands of Stony Brook undergraduates, a course that has spread to more than 24 other American campuses, and adapt it for countries that have not had a tradition of a free press or even free inquiry? We do know that globally there is an unmistakable hunger, especially on the part of young people, for more information they can trust.”

Rick Hornik, a lecturer at Stony Brook University School of Journalism, began teaching elements of the course to about 125 students last month. Hornik is a former executive editor of AsiaWeek and served as a bureau chief for Time, Inc. in Warsaw, Boston, Beijing and Hong Kong, as its national economics correspondent in Washington, D.C. He will be working with the Journalism and Media Studies Centre faculty and researchers to develop a culturally sensitive, Asia-based news literacy curriculum.

“News literacy helps people to distinguish between different information and work out what’s credible,” said Hornik. “It’s applying critical thinking to figuring out what’s reliable information. This is an essential skillset for the younger generation because there’s a tsunami of digital information.”

The News Literacy course at Stony Brook has been taught to more than 8,000 undergraduates at the University in the past five years and has spread to more than 30 other American universities. The curriculum includes material dealing with how to judge the reliability of news sources, how to separate news from opinion, how to recognize news media bias and audience bias, and how to become a more critical and engaged news consumer and citizen in the digital age.

This program has come at a time when Hong Kong University is expanding its efforts in news literacy education. Chan is teaching a university-wide course called Media in the Age of Globalization, which has a record high enrollment. The Journalism and Media Studies Centre will offer two other university-wide media-related courses in the spring semester.

“In this day and age, when citizens have become producers as well as consumers of news, journalism and media education must go beyond the confines of the traditional journalism curriculum,” said Chan. “News literacy should be embedded at all levels of education and also needs to be taken to society at large.”

Hornik notes that the news media ecosystem in China already is starting to change. “In some ways the course may be more useful here than in the U.S. because the demise of traditional government-sponsored news media in much of Asia is viewed as a good thing. Because of social media official news outlets in China increasingly find that they must alter their coverage of ongoing stories to reflect the reality on the ground.”

Prior to the current grant, Stony Book University’s Center for News Literacy had entered into a three-year partnership to promote news literacy in Bhutan, the world’s newest democracy. Under this agreement, staff members from the Center will travel to Bhutan once a year for the next three years to host workshops for elementary school teachers on how to teach news literacy.

Earthstock 2021 features a mix of in-person and virtual events this week, as the University kicks off its annual, weeklong celebration of Earth Day. The keynote lecture, “Wild Long Island,”will be at 4 p.m...

Lunar New Year, also known as the Chinese New Year or Spring Festival, is a chance to start fresh, see loved ones and share in the hope of good things to come. The Stony Brook University community celebrated the Year of...

The Department of Energy Management has furthered its commitment to reducing energy consumption on campus in light of the larger environmental and societal shifts taking place.