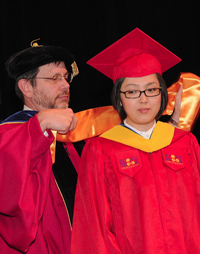 The actual college rankings were based on the mid-career median pay figures.

“The report highlights the value of a Stony Brook undergraduate degree in securing that first job as well as years later at mid-career,” said Stony Brook University President Samuel L. Stanley Jr., M.D. “This report exemplifies a solid return on investment as demonstrated by Stony Brook’s highly affordable tuition compared to private schools and other public schools. It’s my job now to see to it that we raise that bar even higher.”

The PayScale report is based on the results of surveys of employees who possess a bachelor’s degree. No higher degrees are included in the survey. Only graduates who are employed full-time are included. The Seattle-based company surveyed 999 campuses, 97 percent of which had more than 5,000 undergraduate students. The report is available online at www.payscale.com/best-colleges. PayScale bills itself as the leading online provider of employee compensation data.