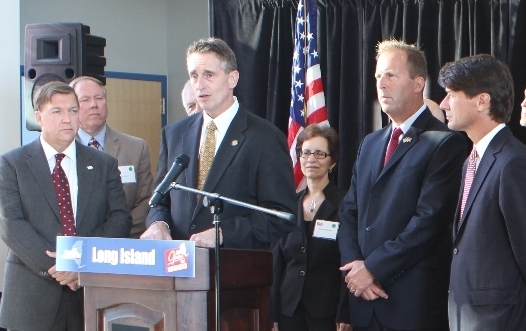 On Wednesday, August 10, the Long Island Regional Council for Economic Development, one of Governor Andrew M. Cuomo’s ten councils representing every region of the state, held its inaugural meeting at the Center of Excellence in Wireless and Information Technology at Stony Brook University. The goal of the Long Island Regional Council for Economic Development—and its counterparts across the state—is to redesign the relationship between the state government and businesses to stimulate regional economic development and create jobs statewide.

“It was an outstanding experience to host the inaugural meeting at Stony Brook’s Center of Excellence in Wireless and Information Technology, which itself is a catalyst for economic development,” said Stony Brook University President Samuel L. Stanley Jr., MD. “This is a very significant initiative and bodes well for the economic outlook of Long Island and the State of New York, and I am excited to be a part of it. Stony Brook faculty and staff will contribute the resources needed to achieve success.”

In July, Governor Cuomo and Lieutenant Governor Duffy launched the Regional Councils, announced the membership, and outlined how each region will compete for funding from a total pot of up to one billion dollars in economic aid. Additional information about Regional Councils is available at www.nyworks.ny.gov, where stakeholders and members of the public can learn more about the councils through the regional summaries and data snapshots.