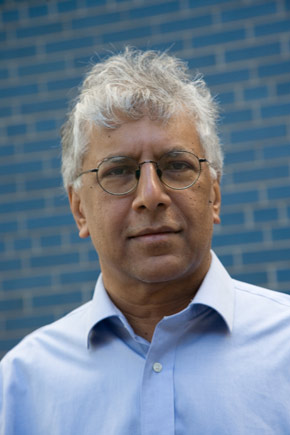 Poet, essayist and critic Vijay Seshadri, winner of the 2014 Pulitzer Prize for Poetry, will give a reading on Tuesday, September 23, at 4 pm in The Poetry Center on the second floor of the Humanities Building. He is the author of three collections of poetry: 3 Sections, which was awarded the Pulitzer; The Long Meadow, which won the James Laughlin Award; and Wild Kingdom. The Pulitzer committee described 3 Sections as “a compelling collection of poems that examine human consciousness, from birth to dementia, in a voice that is by turns witty and grave, compassionate and remorseless.”

The event — sponsored by The Poetry Center, Department of Cultural Analysis and Theory, Department of English, Humanities Institute and Mattoo Center for India Studies — is free and open to the public.

Seshadri’s poems, essays and reviews have appeared in AGNI, The American Scholar, Antaeus, Bomb, Boulevard, Lumina, The Nation, The New Yorker, The Paris Review, Shenandoah, The Southwest Review, Threepenny Review, Verse, Western Humanities Review, Yale Review, The New York Times Book Review, Philadelphia Enquirer, Bomb, The San Diego Reader and TriQuarterly, and in many anthologies, including Under 35: The New Generation of American Poets, Contours of the Heart, Staying Alive: Real Poems for Unreal Times, and The Best American Poetry 1997 and 2003.

He holds an AB from Oberlin College, an MFA from Columbia University, and has received fellowships from the New York Foundation for the Arts, the NEA and the Guggenheim Foundation. Seshadri has worked as an editor at The New Yorker and has taught at Bennington College and Sarah Lawrence College, where he currently directs the graduate non-fiction writing program.

Click here for information on the September 24 reading at Stony Brook Southampton.