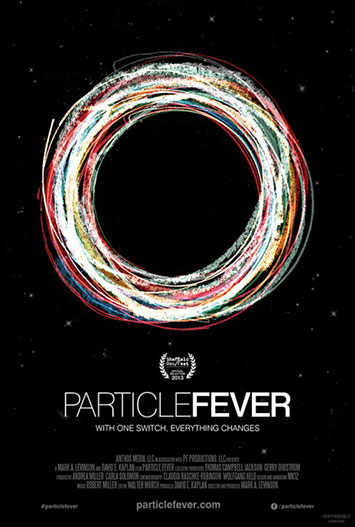 “Particle Fever” provides a behind-the-scenes view of scientists working to discover the origin and makeup of matter in the universe at the world’s largest and most powerful particle collider at CERN in Switzerland. The film will be shown on campus at the Simons Center Auditorium (free admission) on Wednesday, May 14, at 6 pm, and also at the Cinema Arts Centre in Huntington, New York, on Sunday, May 18, at 2 pm, followed by a wine and cheese reception with a panel of scientists, including John Hobbs, a professor in the Department of Physics and Astronomy and Stony Brook University and a senior physicist at Brookhaven National Laboratory (BNL). Tickets are required for Cinema Arts (see below).

The film follows six scientists during the launch of the Large Hadron Collider (LHC), a 17-mile ring of superconducting magnets that make up the biggest and most expensive experiment in history. Particle Fever is the story of more than 10,000 scientists from more than 100 countries joining together to pry free the mysteries of the cosmos by recreating the conditions that existed just moments after the Big Bang and attempting to find the elusive Higgs boson, a particle key to the makeup of matter across the universe.

Directed by Mark Levinson, a physicist turned filmmaker, and edited by Walter Murch (Apocalypse Now, The English Patient), Particle Fever is a celebration of discovery, revealing the human stories behind this epic machine.

“This movie about one of the greatest scientific ventures in history is a mind blower,” said Stephen Holden of The New York Times.

Tickets are $10 for Cinema Arts Centre members and $15 for the general public. All tickets include the post-screening reception.

Scientists involved in the panel discussion include:

Denis Damazio is a BNL physicist working on the ATLAS experiment at CERN. He develops software and algorithms that called triggers, which help particle detectors search for out-of-the ordinary particles in the debris from head-on collisions of high-energy particle beams. He will join the conversation from CERN via Skype.

Howard Gordon, an experimental high-energy physicist at BNL, where he is a senior scientist and deputy chair of the Physics Department. He has worked on the ATLAS experiment at the LHC since 1994 and also serves as chair of the ATLAS Collaboration Board, which has representatives from almost 180 institutions in 38 countries.

John Hobbs is a physics professor at Stony Brook University and a senior physicist at BNL. He has been working on the ATLAS experiment since 1998, searching for the Higgs boson and supersymmetry particles.